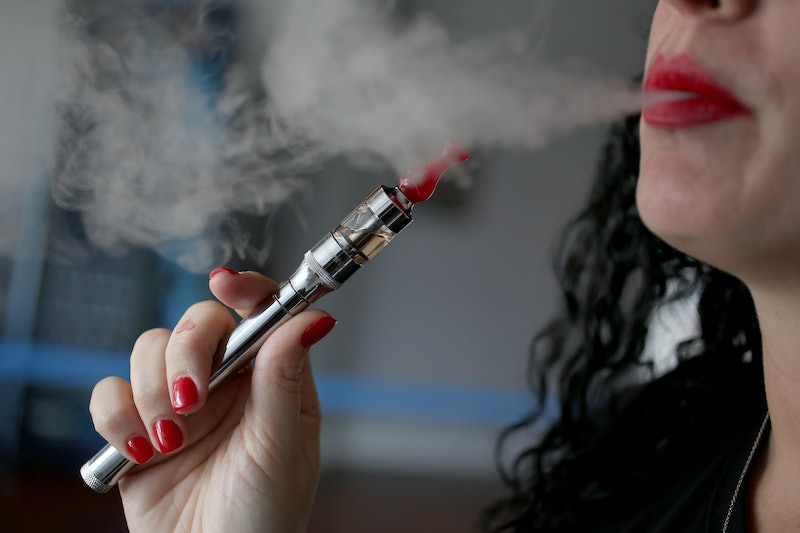 If you’re a person with a uterus and plan to get pregnant at some point, avoiding e-cigarettes may be crucial for successfully conceiving, new research says. Published in the Oxford Academic Journal of the Endocrine Society, the new study shows that using e-cigarettes, also known as vaping, can make it more difficult for an embryo to implant in the uterus. It's important to consider that vaping can be harmful to uterine health and overall fertility, researchers say, even though some experts consider e-cigarettes a safer alternative to smoking tobacco-based cigarettes. It's also worth noting that, however important this research is, it was conducted with mice as study subjects, and may not be an exact measure of how vaping affects humans — but it's still an important piece of research as science's understanding of vaping grows.

“Many people presume e-cigarette use is a safe alternative to smoking,” Dr. Sinem Karipcin, MD, Director of Program for Preventing Genetic Diseases and Fertility Specialist at Columbia University Fertility Center tells Bustle by email. “E-cigarette users are exposed to variable levels of nicotine, depending on the device and vaping technique. The effects of smoking have been well-investigated. Women who smoke are more likely to be infertile and experience early menopause compared to women who never smoked before.”

The University of North Carolina at Chapel Hill researchers found that nicotine and chemicals found in vaping fluids contain compounds that can inhibit conception, VICE reports. Vaping during pregnancy can also cause long-term health and developmental problems in babies, the study authors report. While some health experts recommend e-cigarettes as safer than traditional cigarettes during conception and pregnancy, researchers say that it’s important that users understand the potential risks involved with vaping. Since vaping is a relatively new technology, researchers are still uncovering the risks associated with it.

“These findings are important because they change our views on the perceived safety of e-cigarettes as alternatives to traditional cigarettes before and during pregnancy,” lead study author Dr. Kathleen Caron, PhD, the chair of the department of cell biology and physiology at UNC at Chapel Hill, said in a press release.

“We found that e-cigarette usage prior to conception significantly delayed implantation of a fertilized embryo to the uterus, thus delaying and reducing fertility in mice,” Dr. Caron said. “We also discovered that e-cigarette usage throughout pregnancy changed the long-term health and metabolism of female offspring — imparting lifelong, second-generation effects on the growing fetus.”

While the serious health risks associated with smoking tobacco, especially during conception and pregnancy, are well known, knowing that vaping presents its own risks is important, the study’s authors say in the press release. Essentially, the study shows that inhaling nicotine, whether via vaping or cigarettes, may block your chances of conception. Moreover, it can also cause birth defects in babies, such as facial clefs and uneven skull growth, VICE writes.

If you smoke and are ready to quit, especially if you’d like to get pregnant soon, talk with your doctor about finding the best smoking cessation plan for you. Health experts also suggest that if you're not using vaping as a way to quit smoking in the first place, skip it. Inhaling nicotine in any form can increase your risk of health issues related to nicotine use. While vaping might seem like a healthier alternative to smoking tobacco, researchers are still concerned about its long-term health effects. And even as quitting smoking can be a challenging process, it’s also important for your health and that of your family.