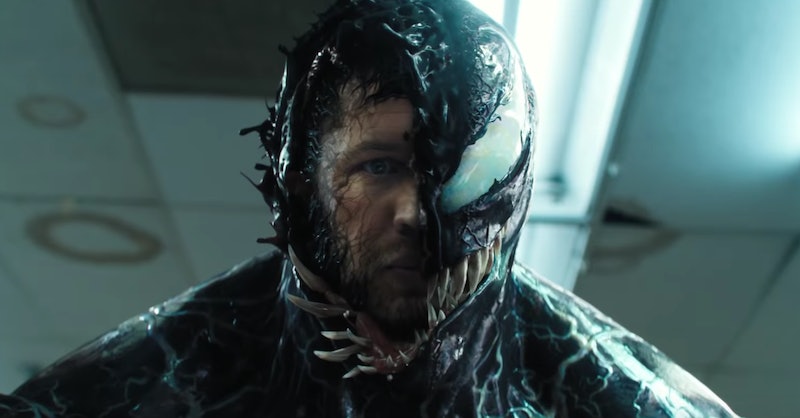 After this past summer's superhero movie releases, Marvel fans now have a long time to wait until the next MCU movie, which will be March 2019's Captain Marvel. But that doesn't mean that the next few months won't be jam-packed with comic book fun, because Sony's Spider-Verse has taken off in full swing with Venom. The movie shows the origin of one of Spider-Man's most famous nemeses, but it's still not really clear where Venom came from.

You probably know that the Symbiote/human mash-up played by Tom Hardy is a villain. In the Spider-Man comics, Venom has had a few varying origin stories, but the most notable one is the alien being's original debut in the comics, which took place in 1984's 12-issue comic series called Marvel Super Heroes Secret Wars. That comic book tells a far different story than the one that unfolds in Venom, as the comic portrays Spider-Man visiting an interstellar planet called Battleworld (where the titular "secret wars" took place), which is where the alien Symbiote that became known as Venom bonded onto the superhero. (Just as a side note, Venom originally bonded onto Deadpool before Spider-Man in that series, but that doesn't have great consequences in the comics.) Then, Spider-Man returned to earth — inadvertently bringing Venom along.

Spoilers for Venom ahead. Venom the movie goes in a very different direction. Billionaire Carlton Drake (Riz Ahmed) spearheads The Life Foundation's efforts to prepare for the end of the world by exploring space — with plans to later inhabit a new planet. His rocket ends up finding a comet that was crawling with living beings called Symbiotes. Those Symbiotes are also what make up Venom in the comics, but there's no comet involved there. The Life Foundation is, however, still an aspect in some Spider-Man comics, and Carlton does get a hold of Symbiotes but not after visiting outer space. The movie doesn't explain how the astronauts got onto the comet to capture the Symbiotes, but it's suggested later that it was the Symbiotes' plan all along.

In the comic book Venom: Lethal Protector from 1993, Spider-Man had defeated Venom, meaning that the Aymbiote had stopped using Spider-Man as a human host. Venom ended up in a underground city below San Francisco, according to Comic Vine. There, Carlton's Life Foundation found Venom and the group extracted five offspring from the Symbiote — Venom can reproduce asexually, according to Marvel Database — to use themselves. One of those offspring became Carlton's super-villain identity,

As for the movie's interpretation of the physical appearance of Venom sans his human host, Eddie Brock, it's true to both the comics and 2007's Spider-Man 3, which features Venom. The Symbiotes' name comes from the symbiotic relationship which occurs in the natural world between various organisms that rely on on each other for life. Venom isn't exactly a parasite, because it helps Eddie Brock by healing the human's cancer, which the comic books portray but the Venom movie does not. (Venom does heal Brock's injuries, however.)

So, the origin story audiences get in the movie is probably not exactly what Marvel comics fans expected. But the main points you need to know — and that the movie gets right — is that Venom started off as a shape-shifting alien known as a Symbiote, and that those Symbiotes don't have Earth's best interests at heart.

More like this
The 50 Most Powerful Characters In The Marvel Universe, Ranked
By Johnny Brayson and Nola Pfau
Lin-Manuel Miranda & Tituss Burgess React To 'Little Mermaid' Casting Backlash
By Radhika Menon
These 25 International Horror Movies On Netflix Prove Fear Is A Universal Language
By Bustle Editors
Lego Just Announced Its 'Black Panther' Set Release Date
By Maxine Harrison
Get Even More From Bustle — Sign Up For The Newsletter