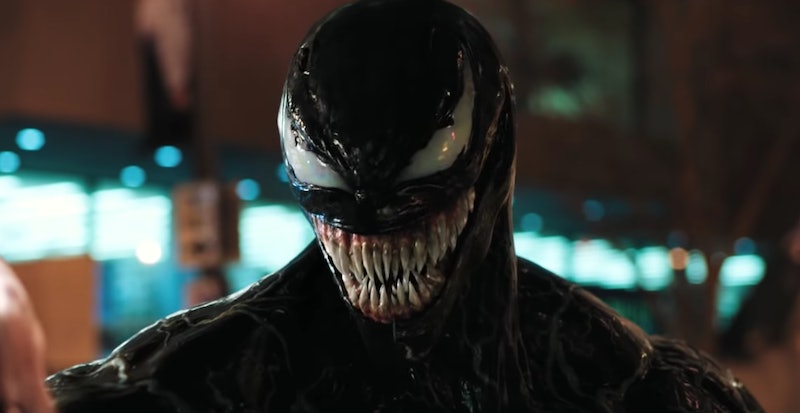 Venom officially hits theaters on Oct. 5, and the first film from Sony's Marvel Universe is sure to thrill you, or at the very least it will entertain you. As you may have heard, Tom Hardy provides Venom's voice, but that doesn't mean you don't get to watch the hunky actor in the movie as well — of course, Hardy also plays the super villain's human host, Eddie Brock. This isn't your average Bruce Banner/Hulk dual personality though, because Eddie and Venom are two different beings, so Hardy had to play double duty in the movie.

In an interview with Entertainment Weekly, Hardy described the process of playing both Eddie and Venom, calling it "geeky" due to the complexity. When attending San Diego Comic-Con in July, Hardy explained, "The sound boys... they worked relentlessly to trigger [it]. I’d have to lay down the vocal for Venom in the morning and then play Eddie opposite Venom in my earpiece, and whoever was working in the scene with me, had to hear Venom at the same time but then ignore that they’d heard Venom."

It sounds really complicated, but once you see Venom it makes more sense. Because the other characters in the film don't necessarily see or hear Venom when they're in scenes with Brock. In other words, you see Tom Hardy playing Brock and then you hear his voice as Venom (which only Brock hears) and then the other characters have to wait for Venom's voice before talking themselves.

As if that doesn't sound complicated enough, Hardy explained how sometimes Brock would converse with Venom — while Venom was using Brock's body as a host. "[The sound engineer] would be under the stage queuing Venom accurately so I could cut across him and talk and argue with myself, and stuff like that. It’s a bit techie, it was fun," the actor said.

As much as you may think of Venom as a "Tom Hardy movie," the actor credits his super-villain alter ego's voice to the behind-the-scenes operators. "To be fair, the sound boys really play Venom. It’s my voice, but they play Venom," Hardy told EW, laughing. Even if Hardy's being humble, the actor definitely isn't the only star to play a part in the new antihero movie. Venom also features other major stars like Riz Ahmed, Michelle Williams, Woody Harrelson, and Jenny Slate.

If you plan to go see Venom, you may want to consider seeing it twice. The first time, just watch it to enjoy the action-packed take on a supernatural preparation for the apocalypse that goes unexpectedly. Then, the second time, try to imagine what it was like for all of the actors sharing scenes with Hardy while he played Eddie Brock, as they had to each time it perfectly around the pre-recorded voice of Venom, which is also Hardy.

The movie may even be more fun the second time if you decide you want to geek out over the fact that Hardy literally argues with himself. Well, in the movie it's technically Venom and Brock arguing, but you get the idea.