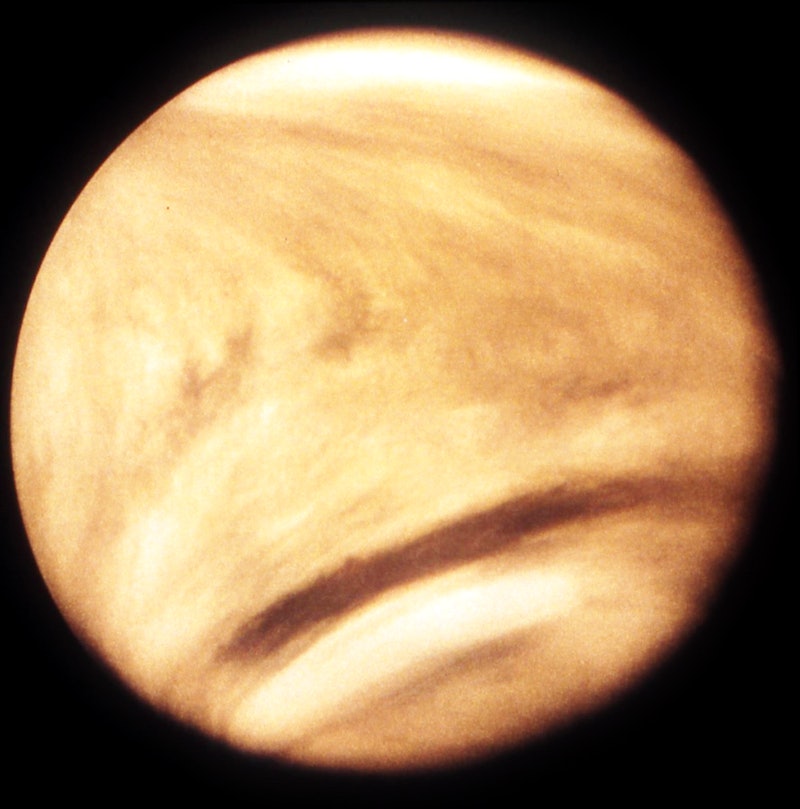 We often associate planets turning retrograde with a period of bad luck, but when Venus appears to spin backwards this weekend, it may in fact open quite a few new doors to love. In 2017, Venus retrograde starts between Saturday, March 4 and Monday, March 6 (depending on which astrologer you ask) and runs through April. The planet that rules love, attraction, and beauty is the most rare to become retrograde, according to Gostica, only doing so once every 19 months.

Unlike devilish Mercury, you don't need to fear painful miscommunications or an upending period of utter chaos this spring. Instead, expect 2017's Venus retrograde to be a time of self-reflection and evaluation for both brand new and long-term relationships. During the course of Venus retrograde, you may be tempted to shake up your love life entirely, but astrologers recommend holding out until this six week period ends April 15.

So what does it mean exactly when a planet turns retrograde? While no actual physical changes occur during these periods, when a planet turns retrograde, it appears to those on Earth to alter the direction of its orbit. Planets typically progress through the night sky from west to east — called "prograde" motion. Depending on where the planet is in its orbital trajectory its positioning relative to Earth can make it appear as if it has reversed course, traveling in a "retrograde" motion.

Often planets turn retrograde several times a years (thanks a lot, Mercury), and multiple planets can become retrograde at once. Jupiter began its 120 day retrograde period on Feb. 6, coinciding with Venus, and the two together will produce a whole lot of big life questions.

Venus retrograde will perfectly align with the start of spring fever; according to Elephant Journal, during this period your love life may experience quite a few ups and downs. Venus may throw an old flame into your path, and if you and your ex are fated to be together, this period of retrograde may reconnect you. On the other hand, the rekindling may also provide a sense of closure, finally allowing you to move on. Venus will also challenge your current relationship, prompting questions such as "Is this what I really want?"

A fragile relationship may enter shaky territory when irreconcilable differences are exposed, but it is advised to not begin any new romantic endeavors or end old ones until the time of upheaval passes and you can once again see things objectively. As Elephant Journal points out, "It is not seen as a favorable time for initiating activities in the areas of life that Venus rules, because your perception is off-kilter. In the case of Venus retrograde, you should slow down and reassess what — and who — you value."

While your heart might get pulled in quite a few different directions this month, at least it will certainly not be boring. Happy spring!