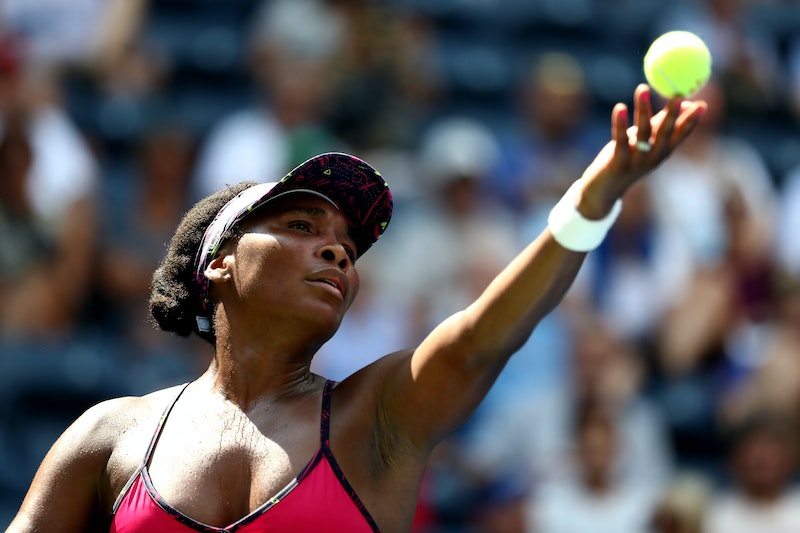 When I connect with V — that’s Venus Williams, to you — over the phone the Wednesday before the 2019 U.S. Open is set to start, I am struck by how quiet her voice is. I am so thrilled to speak with her that I can’t tell if she’s so quiet underneath the sound of my heart pounding, or if she’s resting her voice before the competition.

Williams’ presence has loomed incomparably large in the world of tennis; she turned pro in 1994, the year I was born, and no discussion of modern tennis would be complete without acknowledging her dynastic influence. Growing up playing tennis with my dad, I imagined me and my younger sister like Venus and Serena, playing with their father, Richard; they are the model for unparalleled excellence in both sports and business. To strain to hear her on the other side of the phone reminds me that she, like me, is human; and for being human, her accomplishments take on yet a deeper resonance.

Williams first played the U.S. Open in 1997, when she was 17 years old. “I was just nervous for the occasion,” Williams, 39, tells Bustle. “I had a lot of fight, and a lot of will. A lot of hunger. And once you have that all you need is a racket.” Today, Venus has seven Grand Slam singles wins under her belt, two at the U.S.Open. This year will be her 21st U.S. Open.

“There's definitely been a lot of change,” Williams tells Bustle, of how tennis has transformed since she first turned pro in 1994, at age 14. “There are a lot of names that people know, and a lot of interest. It's a great time to be a woman in sports and a woman in tennis.”

You could prove Williams’ assertion that it’s a great time for women in sports by looking at tennis alone; players like 15-year-old Coco Gauff or 20-year-old Naomi Osaka, currently ranked number one in the world, are scoring magazine covers left and right, proof positive that these up-and-comers are household names along with actors or musicians. But we’re also talking as the summer of the U.S. Women’s National Soccer team comes to a close, and despite the world cheering their accomplishments during the World Cup in June, those athletes still have yet to secure the equal pay for which they sued the U.S. Soccer Federation back in March. TIME reported that mediation of that suit “broke down” in August.

Tennis is notably one of the few sports that has mostly achieved pay parity — thanks, in part, to Williams. Billie Jean King famously said, “Everyone thinks women should be thrilled when we get crumbs, and I want women to have the cake, the icing and the cherry on top, too.” The U.S. Open guaranteed equal pay for women and men’s teams in 1973, after King threatened to boycott the tournament. The Australian Open followed in 2001, then the French Open in 2006. Williams pled the case for equal pay to Wimbledon’s governing body in 2005, The New York Times reports; in 2006, she penned an op-ed for Britain's The Times aimed at the board, writing: “Wimbledon Has Sent Me a Message: I’m Only a Second Class Champion.” Then, in 2007, she was paid $1.4 million for her win, as was men’s champion Roger Federer. Today, all Grand Slam competitions pay male and female winners equally, as do some smaller tournaments, but others, like August’s Cincinnati Masters, do not.

Sports pundits point to tennis as a potential model for creating pay parity in other sports, too. “If the women were to play alongside the men in major tournaments — as tennis does with the Grand Slam tournaments — including a single World Cup every four years, there would no longer be a gap in revenue generated by the women and the men,” Cork Gaines wrote for Business Insider, referencing a common argument for maintaining the pay gap in professional sports. “The women's sport would likely grow in popularity if given the same stage and level of promotion as the men, increasing the overall revenue for the sport.”

But it can’t just be on the female athletes to fight: “It's on the men, it's on the viewers,” Venus says. “It’s important to speak up not just for yourself, but also for what’s right.”

Williams, ever the businesswoman, says that building support for women’s sports is “a great investment” in not just athletes, but in communities too. Williams leads two small businesses; EleVen, an athletic apparel line, and the design firm V Starr Interiors. Williams has also partnered with American Express ahead of the Open; having been a card member since she was 15, she says it was a “natural fit” to help bring card members the best Open experience possible. This year, the company is giving over 100 tickets to New York-based small businesses owners, so they can network with their peers or bring prospective clients to the event. Opportunities like this, Williams said, help “support women in small business” who otherwise might not have access to events like the Open.

“If I see a place where I can help, I do my best to try and make a difference,” Venus says. "And that's more than anyone can do for themselves on the court or on the field, or in the office.”

Update: This story was updated from its original version on August 27, 2019.

More like this
What Is Jeanie Buss' Net Worth? The Lakers President Is Uber Rich
By Hugh McIntyre
Spice Girls’ Net Worth: The Richest Member Is Wealthier Than The Rest Combined
By Hugh McIntyre
Sandra Bullock, Girlboss Extraordinaire
By Matt Harkins & Viviana Olen
What Is Barack Obama’s Net Worth? He Makes *Way* More Now As An Ex-President
By Hugh McIntyre
Get Even More From Bustle — Sign Up For The Newsletter