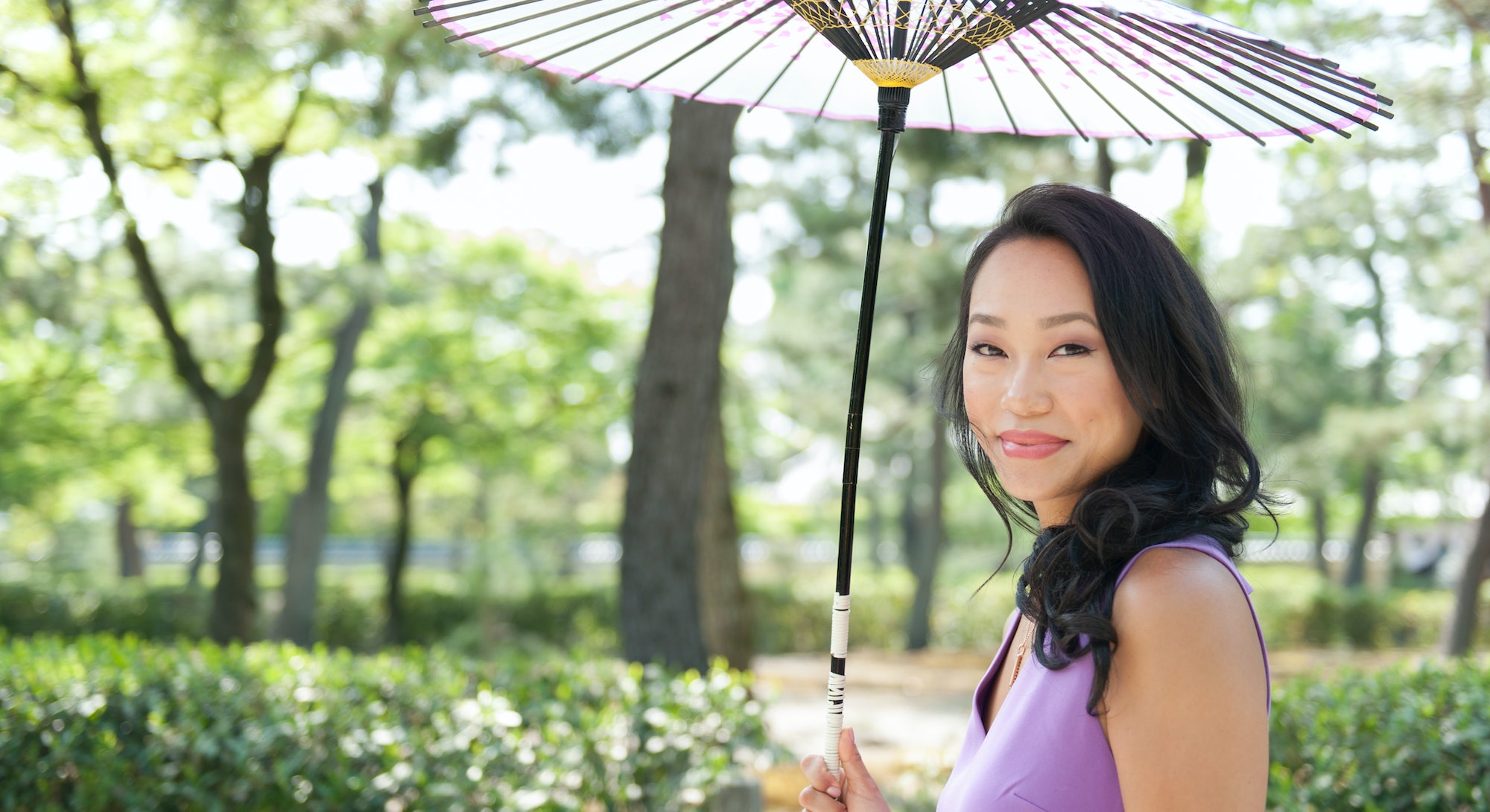 In Bustle’s Q&A series 28, successful women describe exactly what their lives looked like when they were 28 — what they wore, where they worked, what stressed them out most, and what, if anything, they would do differently. Tatcha founder Vicky Tsai opens up about what caused her the most stress at 28, how her goals have changed dramatically since founding her own company, and what she'd want her younger self to know about her life now.

It can be difficult to stand out on the crowded shelves of Sephora, let alone the billion-dollar beauty industry in general. But Vicky Tsai has managed to figure out how: by creating beautifully made products packaged in elegant bottles and jars that aim to "honor" your skin, not shame it. When she founded Tatcha in 2009, Tsai had no idea that she would go on to create a successful skin care brand beloved by beauty lovers, celebrities (like Kim Kardashian and Meghan Markle) and makeup artists (like Daniel Martin and Mario Dedivanovic) included. She just wanted to share the beauty secrets she had learned from her travels to Japan with women in America who, like her, may have been treating their skin too aggressively.

But before she dreamt up Tatcha, Tsai was on an entirely different career path. With a shiny new business degree under her belt, she was hired by the biggest coffee conglomerate in the world to launch new products overseas. At 28, Tsai was traveling to Asia twice a month and working tirelessly, spending much of her time away from loved ones. And while she experienced anxiety, it was during this time that she would discover the healthy solution to her skin issues, which would inspire her to create her own company.

Take us back to when you were 28. Can you describe exactly how you were feeling and where you were on your 28th birthday?

When I was 28, I had just graduated from business school and had started working for Starbucks to launch consumer products in China. The first thing they have you do is work in a store. I probably spent my 28th birthday in Shanghai: opening the store before sunrise, taking out the garbage, setting up the patio furniture, and doing dishes. I have a vivid memory of getting the ratio of water to espresso wrong for one customer when he ordered an Americano. He was so unhappy with me and it was incredibly humbling — going from getting a fancy degree to not being able to make a cup of coffee.

Where were you working when you were 28? What was your job title and your main responsibilities?

I was a Brand Manager for Starbucks International. My job was to establish a consumer products business and launch bottled Frappuccino in China before the Beijing Olympics. It was something that normally takes three years and I had a year and a half to do it.

My husband and I bought our first home. It was a little craftsman in Seattle that was over 100 years old. It had stained glass windows and carved wood throughout. It looked like a dollhouse.

Where did you live?

We lived in Seattle, but I traveled every few weeks to China. When I was away on my first business trip, my husband decided to surprise me by painting the walls a happy buttercup yellow. He accidentally used high-gloss cupboard paint instead of wall paint, which is typically matte. I remember coming back from the trip and wondering why it felt like I was on the inside of a shiny yellow balloon.

What did you think your biggest obstacle was when you were 28?

The work I was doing was very interesting, but really challenging. I got to travel a lot, partnered with different companies to get the job done, learned about operations, supply chains, marketing strategy, intellectual property rights, and so forth. The biggest challenge was that I didn’t have a manager — there was no one to teach me or answer my questions. It was hard at the time, but it taught me to be resourceful and in retrospect it was incredible training for when I eventually started my own company. I also had a broken arm at the time, with a cast from my wrist to my bicep for four months. That made international travel extra tricky.

What was your biggest source of anxiety at the time? Be as specific as possible.

Work. 100%. The year and a half that I had to launch Starbucks’ consumer products business in China was a sprint to the finish line. I didn’t have a manager, timelines and budgets were tight, and everything was new to me. I traveled to Asia every few weeks and when I was in Seattle, stayed in the office regularly until 11 p.m. and worked through the weekends. At one point I realized I had worked 40 days straight without taking a day off. When everything was tied up and ready to go, a VP in my group said he didn’t want to miss Halloween at home, so there was a last-minute scramble to reschedule the launch. As a parent now, I respect that he didn’t want to miss Halloween with his kids, but at the time, I was mortified, especially because it was right before launch.

Ultimately, the rescheduled launch went well — launch sales were strong, we got a full page of coverage in Asia's Wall Street Journal for an idea I had that worked well, Starbucks gave me all sorts of lovely internal recognition and, to my surprise, Howard Schultz asked me to present to the Board of Directors. It felt really gratifying to know that the work was successful. But shortly after all of that, I had my annual performance review and was given a “Meets Expectations." I left not long after.

I think my 28-year-old self would be relieved to hear that I found work that I really love.

Describe your favorite outfit and beauty look from when you were 28. Anything in your wardrobe or makeup bag that immediately brings you back to that time?

At the time, I had acute dermatitis from a prior work experience. I mostly used Aquaphor, which comforted my angry skin but left me looking greasy. I almost always flew through Tokyo on my way back and forth to China, which is where I fell in love with the blotting papers that would end up being the beginning of Tatcha. Everything else in my wardrobe and makeup bag were maximized for travel and efficiency, especially since I had a cast almost all the way up my arm. The most important thing was pants that could be pulled on with one hand.

My Friday nights were typically catching an 11 p.m. flight home to Seattle from China. If I was lucky enough to be home on a Friday, it was just basic life maintenance; because I was traveling so much, I got really behind on cleaning, laundry, house projects, etc.

What was the one moment in your career when you knew you’d made it?

I still don’t think I’ve had a moment where I thought, “I’ve made it,” but I feel most fulfilled when I feel like I get to make a difference. Sometimes that means visiting incredible girls around the world whose education we are helping to support through our partnership with Room to Read. Other times that means spending time with clients and hearing how much the changes they’ve seen in their skin has impacted how they feel — oftentimes this is after chemotherapy. My happiest time though is in the office, spending time with our young future leaders, and hopefully giving them the opposite experience of what I had when I was 28. I care deeply about developing young talent, giving them the freedom and support to do great things, without the downside of feeling like they’ve given the waking hours of their young lives to be a cog in a wheel.

What’s your biggest goal now? How has it changed since when you were 28?

When I was 28, my biggest goals were defined by conventional external measures of success: am I getting promoted as quickly as my friends? Am I getting paid as much as my friends? Will my parents be proud? I had a lovely resume with brand-name companies and brand-name schools, and I was trying to figure out how to keep that storyline going.

Then I started a company and ate a great big piece of humble pie for a decade [that would require explanation in] another entire article.

Today, I define my goals and success through impact. I am filled with gratitude every day that I get to work with inspiring, talented, passionate people who love what they do and care about making a difference for our clients and in the world through girls’ education. I am the happiest I have ever been in both my career and in my life because I’ve found my joy in supporting others.

This interview was edited for length and clarity.