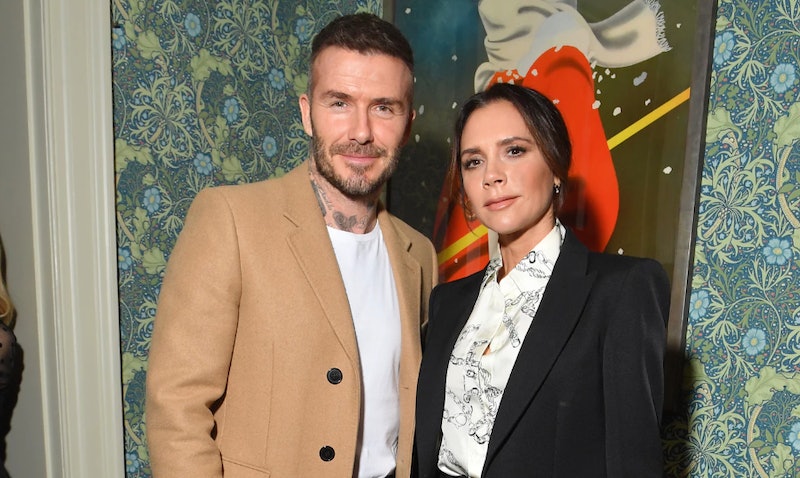 If there's one celebrity relationship I am determined will stand the test of time, it's that of Victoria and David Beckham. The pair have four beautiful kids, thriving careers both separately and together, and seem more in love every single day. And the Beckham's recently celebrated a landmark date recently which solidified their place as the world's top power couple: their 20th anniversary. It therefore comes as no surprise to me that Victoria Beckham's 20th Anniversary Instagram post to David Beckham was nothing short of perfection.

The designer shared an animated gallery of the best pictures of her and her husband, alongside a super cute caption: "20 years today. I love you so much xxxxx Kisses x @davidbeckham". The pictures in the post spanned from their wedding day back in 1999, right up to the present day. Picture after picture shows them looking super loved up and cute, and it's guaranteed to give even the most stone hearted person a little relationship envy.

And if that wasn't enough, David also took to his social media profile to share his own trip(s) down memory lane, instead posting a set of four images from his wedding day to current day with his entire family. He wrote alongside it, tagging his wife and each of his children in: "WOW 20 years , look what we created ♥️ Love you so much." K'nawwww.

Unsurprisingly, both posts have garnered thousands upon thousands of likes and comments from both fans and fellow celebrities alike.

Marvin Humes wrote the following short but sweet message on David's post: "Happy Anniversary..20 years 👏🏽," while singer Tyrese Gibson said: "Love you guys!!! I’m so inspired by what you have and the love you have built..... Staying strong and loving and supporting each other through it all..... Cheers to 20 years happy anniversary God bless the Beckham’s."

Over the years, Victoria and David have spoken out about how they maintain their marriage, and how they have made it last as long as it has.

Speaking to Vogue in 2016, in a letter written to herself, VB explained:

"On marriage: have patience. Bite your tongue. Be supportive. And preserve a bit of mystique. Never let yourself go completely (at least brush your hair, clean your teeth, have a bit of a brow going on because you will always want him to look at you and feel attracted). Always make time for each other. Because if you don’t, everything will revolve around the children and I’m not sure how sexy that is! And do not forget the person you fell in love with."

The pair have without a doubt had their challenges over the years, but as ever, Victoria has always been pretty cool and collected when asked how she deals with the rumour mill and nasty comments.

“It can get quite frustrating,” she told The Guardian earlier this year. “But I leave it to my PR team. I don’t get involved.” Classy as ever.

Congrats to the loved up pair!