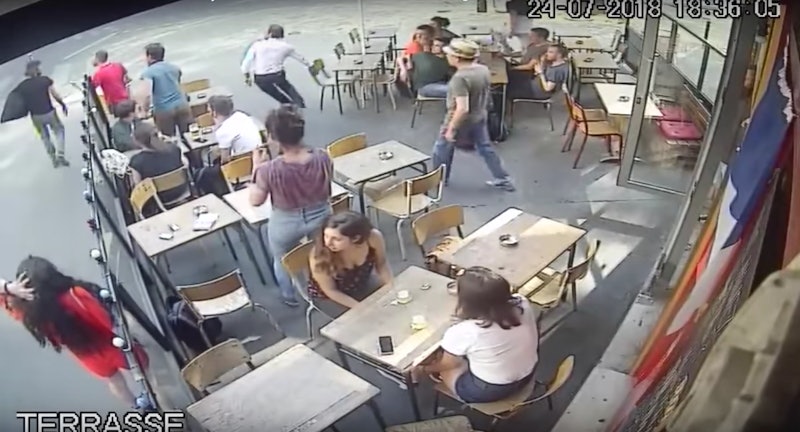 Victims of street harassment often struggle with deciding whether or not they should confront their harassers, who are often men, and who make unwanted comments or sexual sounds at them in public. It's a decision that carries a lot of risk due to the unpredictable nature of interacting with strangers on the street. But last week, one man took his response to a shocking level, as video shows a street harasser punching a Paris woman who told him to "shut up" as they passed each other on the sidewalk.

Last week, 22 year-old Marie Laguerre, who is French, shared security footage of the incident on her Facebook page. The footage shows Laguerre walking around a patio where many people are chatting and some are smoking cigarettes. She intercepts her street harasser, appears to say something as they pass, and the man in question picks up an ashtray and chucks it at her from the opposite side of the seating area.

Both walk off-screen for a moment, but soon her assailant is charging back around the patio, waving his hands and speaking energetically at her. Laguerre walks toward him and the two appear to be having a verbal confrontation, which swiftly escalates, and the man in the video hits her. Customers on the patio reel back in shock and some jump to their feet, before both Laguerre and her assailant walk off-screen in separate directions.

“Last night, as I was coming back home in Paris, I walked past a man who sexually/verbally harassed me,” she wrote in a Facebook post with the video, according to a translation provided by ABC. "He wasn't the first one and I can't accept being humiliated like that, so I replied ‘shut up.'"

In her post, Laguerre expressed frustration with the street harassment she said she experiences frequently. She lamented how common of an experience it is for the women she knows.

“This is an unacceptable behavior," she wrote. "It happens everyday; everywhere and I don't know a single woman who doesn't have a similar story. I am sick of feeling unsafe walking in the street.”

Laguerre said that the man made dirty comments and noises at her when they passed on the street, prompting her to tell him to "shut up."

"I didn’t even think he heard me,” she told the newspaper Le Parisien, according to The Guardian. "But he had heard me and suddenly things happened suddenly. He grabbed an ashtray and threw it at me. It missed my head by a few centimetres.”

Parisian authorities are reportedly investigating the incident, but the attacker has not been identified, The Guardian reports. However, an anti-street harassment law is currently in the works in France.

“The political response must be strong and it is, because for the first time in France we will fine those responsible for street harassment,” said French Secretary of Equality Marlène Schiappa, according to multiple reports. Schiappa is behind a law that would enable authorities to fine people who sexually harass others on the street or on public transportation. She aims for it to take effect this fall.