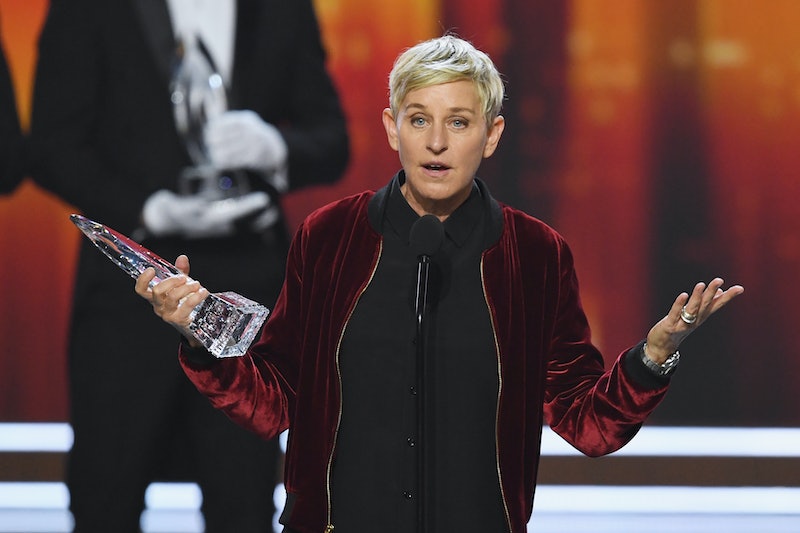 Ellen DeGeneres is widely known as a lighthearted, dance-loving prankster, but this video of an audience member stealing on Ellen shows the TV host is not afraid to put people on the spot either. During a recent segment on her talk show, DeGeneres put out a table filled with swag from her gift shop with a sign saying each guest could take one item for free. Most of the audience members played along dutifully — one person even said she'd go back and buy a hat, since she couldn't decide between two items. However, another wasn't quite so noble.

Unbeknownst to the stream of guests checking out DeGeneres' gifts, there were hidden cameras set up around the room to test their honesty, and let's just say this woman failed with flying colors. She circled back not once, not twice, but three times to take more than her share. DeGeneres then played back the tape while on air, leading to an awkward — but hilarious — confrontation. (For the record, DeGenres was totally cool about the whole situation, despite that this woman literally stole in plain sight.)

"My sister couldn't come, so that was her souvenir," the woman offered as a flimsy excuse.

"A lot of people's sisters couldn't come," Ellen quipped, before sentencing her to sit on stage in the "Ellen chair" for the rest of the taping.

It was, of course, all in good fun, but it goes to show that DeGeneres isn't a person you want to mess with. Not only is she notorious for scaring her guests — both celebrity and otherwise — but she also doesn't hesitate to ask them uncomfortable questions, like that time she cornered Jennifer Lopez about her fling with Drake.

Nevertheless, it seems like we can all use this to learn a valuable lesson: Never steal, but especially don't do it when you're about to be on national television.