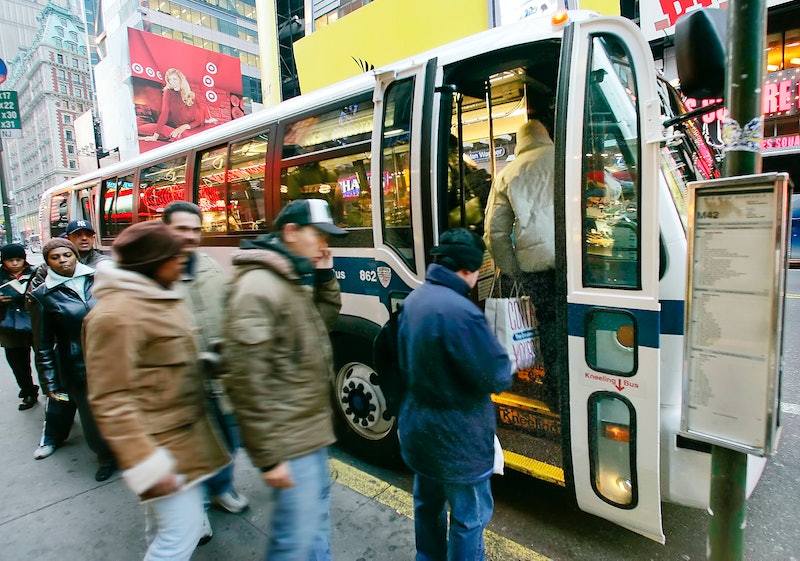 A video first uploaded on YouTube on Wednesday has gone viral on social media for its upsetting content. It's a clip that was originally recorded on a one of the New York City MTA transit system's buses. In the video, a woman goes on an anti-Muslim rant against another woman in a headscarf, insulting her accent and threatening that the Immigration Customs and Enforcement (ICE) is around the corner, among other things.

In the video, the woman who went on the diatribe identifies herself as "Ashley." In the entire duration of the clip, which is half a minute long, no one came forward to defend the woman in the headscarf.

Thousands have shared the video on Twitter, including Martin Luther King Jr.'s daughter, Bernice King, who lambasted the woman for "dehumanizing another human and behaving with no dignity." King didn't limit her criticism to the anti-Muslim ranter; she also criticized another passenger on the bus who appeared to be smiling.

"The smiling man with the headphones on [is] so symbolic of one of the reasons why there’s a resurgence of overt racism and hateful rhetoric," King tweeted.

CNN identified Marco Lao as the person who recorded the video. Newsweek reported that Lao posted about the incident on Reddit and gave context for what took place on Wednesday. The Reddit user wrote that headscarf-donning woman boarded the "bus through the back door because the bus is too crowded. She has a baby carriage."

Without intending it, according to Lao, the on-boarding woman accidentally "triggered the door proximity alarm a few times" which led the white woman to reportedly "scream, 'Get the f*ck away from the door!'" At this point, Lao wrote on Reddit that the woman in the headscarf looked at the enraged white woman who then initiated "to talk sh*t" loudly at the woman with baby carriage."

At one point, the verbally-attacked woman said that she is an American citizen as well, to which "Ashley" responded, "You no citizen. You can’t even speak English."

The woman also addressed Lao and told him her name and said that she was fighting with "some Muslim chick who thinks she has rights that she doesn’t have." "Ashley" then said, “Immigration at the door. Oh, wait is that ICE? Oh, mama, they here for you!"

On Twitter, the disturbing video not only elicited criticism for "Ashley" and her unhinged diatribe, some social media users also highlighted the silence of others on the bus. Communications director for Minnesota Rep. Keith Ellison, Dan Riffle tweeted, "If you're ever on a bus like this and somebody starts screaming racist shit at another person but you stand around doing nothing like everybody on this bus, you're the problem."

The woman's anti-Muslim rant comes only a week after another woman, Anne Marie Messiano, verbally harassed passengers on an MTA bus. Messiano was later on arrested for harassment and disorderly conduct for her behavior on the city's transit system. In a similar clip shared online, Messiano can be seen yelling against immigration and using the n-word.

Incidents like these have compelled some social media users to create tips on helping victims in such cases, particularly through bystander intervention. As one Twitter user said, "Remember that the ultimate goal of bystander intervention is harm reduction. It is not to be a hero, not to make a statement, not to change minds or make headlines. It's to keep everybody involved as safe as possible."