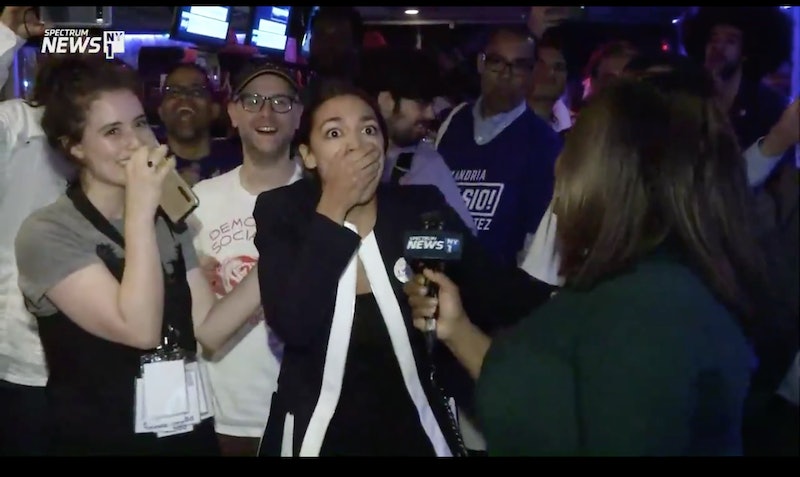 On Tuesday, a 28-year-old first-time congressional candidate secured a shocking victory over ten-term incumbent Joseph Crowley in New York's Democratic primary. Indeed, this video of Alexandria Ocasio-Cortez finding out she won reveals her excitement at being able to move forward with her grassroots-led campaign and progressive platform.

Ocasio-Cortez was watching election results come in during a live interview with New York City's Spectrum News NY1. As news arrived of her victory over Crowley, Ocasio-Cortez stared at the television in disbelief, her eyes appearing wide with shock and excitement. When asked by Spectrum News' reporter if she could put into words how she was feeling, Ocasio-Cortez replied, "Nope, I cannot put this into words."

However, she then emphasized how grateful she was to those who helped get her elected, stressing the groundbreaking grassroots nature of her campaign, which was pitted against the better-funded and more experienced Crowley campaign. As Ocasio-Cortez told Spectrum News:

I cannot believe these numbers right now. But I do know that every single person here has worked their butt off to change the future … That's what I know. And that this victory belongs to every single grassroots organizer, every working parent, every mom, every member of the LGBTQ community, every single person is responsible for this.

Ocasio-Cortez's website reveals she supports a very progressive platform, which she will promote in the lead-up to November's general congressional election. Her platform includes a federal jobs guarantee, the abolition of the U.S. Immigration and Customs Enforcement (ICE) agency, the provision of Medicare for all, and the opportunity for free higher education for all and student debt cancellation, among other initiatives.

During a video announcing her candidacy, Ocasio-Cortez also emphasized that she was running on behalf of working class families, after being frustrated for years by what she believes to be a lack of adept political representation. As Ocasio-Cortez noted:

I'm an educator, an organizer, a working-class New Yorker ... And going into politics wasn't part of the plan. But after 20 years of the same representation, we have to ask, who has New York been changing for? Everyday gets harder for working class families like mine to get by. The rent gets higher, health care covers less, and our income stays the same. It's clear that these changes haven't been for us. And we deserve a champion. It's time to fight for a New York that working families can afford.

Ocasio-Cortez's victory in New York's 14th Congressional district Democratic primary surprised many, given her opponent's long-term incumbent status and his high profile status in the Democratic party. Crowley has served in Congress since 1999 and was largely expected to succeed Nancy Pelosi as Speaker of the House if Democrats regain control of the chamber after November's elections. Crowley spent $3.4 million on his reelection campaign, while Ocasio-Cortez spent around $200,000 on her first-time bid.

In commenting on her victory on social media, Ocasio-Cortez expressed her excitement for the future. "This is the start of a movement. Thank you all," she wrote. Ocasio-Cortez also commented on Crowley's tweet in which the long-term Congressman congratulated her on her victory and emphasized the importance of regaining a Democratic majority in the House of Representatives. In response, Ocasio-Cortez wrote:

Thank you, @JoeCrowleyNY, for your support and longstanding service to our community. I look forward to working towards a takeback of the House on a strong platform of economic, social, and racial justice for working class New Yorkers & Americans. Let’s do this.

Overall, it is clear that Ocasio-Cortez is very much looking forward to promoting her platform as she heads to the general elections on Nov. 6, 2018. She will face Republican Anthony Pappas.