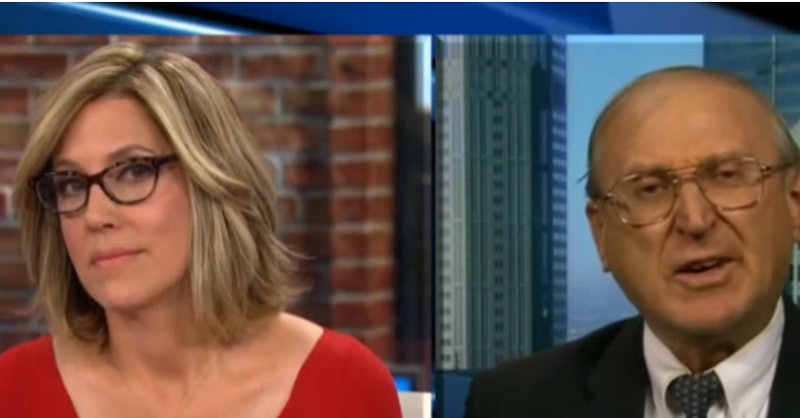 In a heated and disturbing interview on Thursday, Republican candidate Arthur Jones got into a verbal scuffle with CNN host Alisyn Camerota over his blatant denial of the Holocaust. Jones, who describes himself as the previous leader of the American Nazi Party, told Camerota that the Holocaust was an "extortion racket" and a "scam" — so the CNN host slammed Jones for his white supremacist beliefs.

Initially, Camerota attempted to keep the conversation civil in spite of Jones' repeatedly saying Jewish people control "the media." But after the Illinois Republican candidate doubled down and continued raising his voice at the anchor, Camerota told Jones,

You have a long track record of losing. You lose virtually everything that you run for. You’ve run for Congress and you’ve lost, for mayor, for alderman. And we’re not in the business of predicting the news, but I can say that you will lose this race. You couldn’t win dog catcher.

Camerota then said, "Chances are you will go down in flames."

On social media, in addition to condemnations against Jones' blatant anti-Semitism, some observers said that such a powerful and far-reaching network like CNN should not have hosted a white supremacist. ThinkProgress journalist Aaron Rupar said, "CNN is giving a platform to a former leader of the American Nazi Party, Arthur Jones, who is running for Congress as a Republican in Illinois" and sarcastically called it "real constructive stuff."

In the beginning of the interview, Camerota told Jones, "Mr. Jones, it is shocking to hear how vocally and unapologetically racist you are. Are you a Nazi?" Jones responded by saying that for the "past 15, 20 years" he was not involved in any white supremacist organizing on a "formal basis." He then said that he did not call himself a Nazi but that he calls himself "an American patriot and statesman." Camerota then listed a number of things that Jones had done in the past, including attending and speaking at Neo-Nazi rallies as well as celebrating Adolf Hitler's birthday.

The CNN interview became intense when Camerota pointed out that Jones' website was filled with "the most vile, rancid rhetoric I think I’ve ever read." On his website, Jones declares that he is decidedly against sanctuary cities and "illegal aliens." He also calls himself anti-abortion and anti-LGBTQ. In each of his stance, openly stipulated on his website, he also offers a "Read More" option where he explains the supposed rationale behind each belief. But perhaps the most stunning aspect of Jones' "America First" website is the tab for the Holocaust in which he calls it a lucrative "racket" amassing "millions of dollars" on an annual basis.

Defending his website, Jones said, "It’s not vile and rancid, it’s the truth." He went on to tell Camerota, "There’s nothing on that website that’s not true. You Jews media, you’ve gone absolutely nuts. You think that Adolf Hitler’s revived from the grave or something. It’s one man, myself, that’s standing for the truth," he said while raising his voice.

Ultimately, Camerota shut Jones down by laying out his political track record. Jones lost while running for Milwaukee mayor in 1976 and he lost while running for alderman in Chicago in 1987. As The Chicago Sun Times reported, Jones has lost an additional seven times between the 1990s and 2016 in different congressional primaries. Chances are, as Camerota said, he might lose this bid, too.