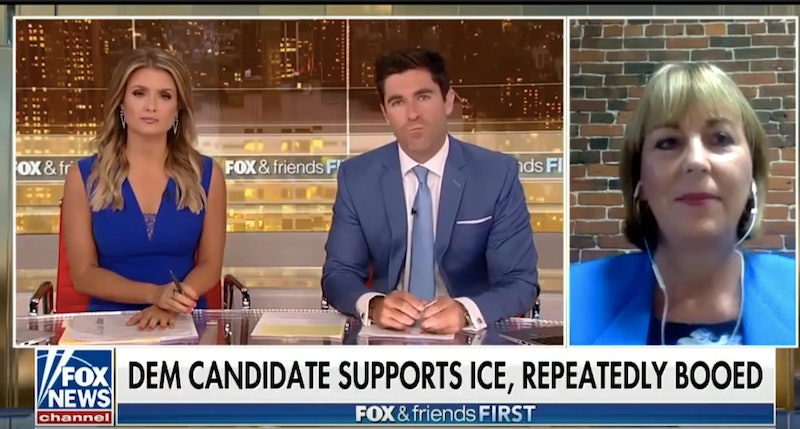 In a cringeworthy on-air moment on Monday, Fox News accidentally booked an anti-ICE democrat while trying to do the opposite. Initially, the goal was to book congressional candidate Ann Kirkpatrick (D-AZ), who has become notable for her favorable views of ICE. But instead, Fox News ended up with Barbara L'Italien (D-MA), a current state senator who is markedly against the Trump administration's current zero-tolerance immigration policy. The executive producer of Fox and Friends, Desiree Dunne, claimed in a following statement that L'Italien "did not identify herself as anything other than Kirkpatrick" before going on-air.

The whole mixup occurred because Fox News reached out to Joe Katz, the former spokesman of Kirkpatrick. According to The Huffington Post, Katz hasn't worked for Kirkpatrick for 10 years, and now works for L'Italien's campaign instead. When Fox News asked Katz to bring "his boss" on the show, L'Italien said to The Huffington Post, “We saw an opportunity to speak truth to power. We weren’t convinced it would happen, but it did.”

The segment opens with a clip of the real Kirkpatrick speaking at a debate in which she was booed for supporting ICE. Then, the hosts of Fox and Friends introduced who they thought was Kirkpatrick.

"Tell us why you do support ICE," they said to L'Italien, who immediately set the record straight, as seen in the clip below.

"I'm actually here to speak directly to Donald Trump," L'Italien said. "I feel that what's happening at the border is wrong. I'm a mother of four, and I believe that separating kids from their parents is illegal and inhumane."

L'Italien continued, "I'm a state senator representing a large immigrant community and running for Congress in Massachusetts. I keep thinking about what we are putting parents through and imagining how terrifying that much be for those families, imagining how it would feel not knowing if I'd ever see my kids again."

Right before the hosts cut her off, L'Italien concluded, "We have to stop abducting children and ripping them from their parents arms."

“Yeah, okay, who is this?” host Rob Schmitt asked, right before the call was ended. “That didn’t go as planned.”

In response to the fact that the hosts continued to call L'Italien Kirkpatrick throughout the segment, L'Italien said to The Huffington Post, “So much for due diligence, so much for fact-checking. They continued to believe I was [Kirkpatrick] even after I said I wasn’t.”

Fox & Friends First's executive producer released a statement later on in the day. Via ThinkProgress, she said,

This morning we invited Congresswoman Ann Kirkpatrick to appear on Fox & Friends First through her press contact on file Joe Katz, who accepted the invitation on Kirkpatrick’s behalf. Katz followed with an email confirming the segment, which also included background information and a campaign logo for Ann Kirkpatrick. During the actual segment, Barbara L’Italien, appeared on camera instead of Kirkpatrick. Despite speaking to producers prior to the interview, L’Italien did not identify herself as anything other than Kirkpatrick until she was live on air, at which point we ended the interview.

As for Katz, he told ThinkProgress, “I showed the exact same commitment to truth and accuracy that Fox News always has.”

L'Italien later released her full statement that she'd intended to give prior to being cut off early. Via Twitter, she wrote, "I've always fought for vulnerable people, and in Congress I will use every opportunity I have to make sure powerful people like @realDonaldTrump hear their voices. Here's the full statement I would've given @FoxNews if I hadn't been cut off. #ma3#mapoli"

In her statement, L'Italien said, "I refuse to believe our only options [for immigration policy] are open borders or traumatizing children, and shame on you for putting this vile, racist policy into place."