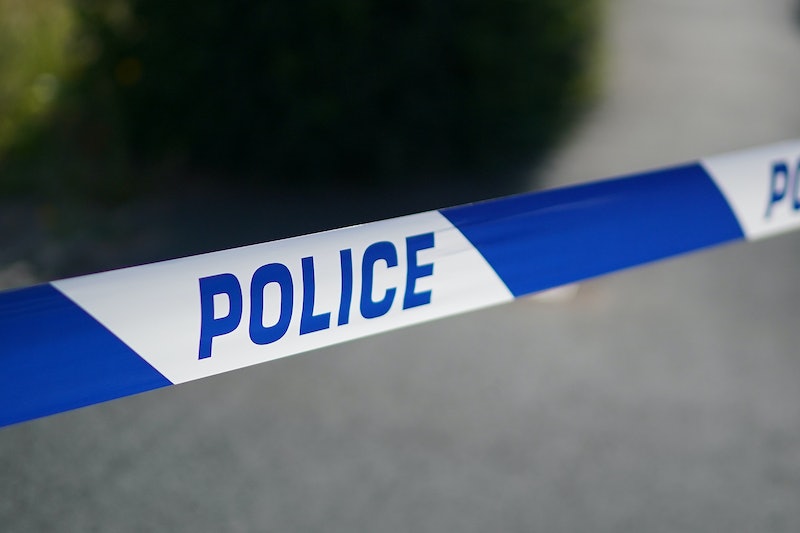 A video that appears to show a black teenage girl being punched by Florida police has gone viral on social media, prompting outrage from many online. But police claim the cell phone footage of the teen's arrest doesn't show the whole story.

In the footage, which was first shared on Instagram by a woman who identified the girl being placed under arrest as her 14-year-old cousin, two Coral Springs police officers appear to have pinned a girl face down on the ground. One officer, who appears to have one knee on the girl's back, can be seen punching the girl twice in the ribs.

"Why you hitting her?" an onlooker off camera screams. "She can't do it. She can't do that, her hand's underneath her!" Bustle has reached out to Coral Springs Chief of Police Clyde Parry for comment.

According to the Coral Springs Police Department, the video shows officers arresting a 14-year-old female at the Coral Square Mall on Thursday. However, in a statement — titled "RUMOR CONTROL" — released Friday, the department also stressed that the video, "shows only the end of the story, not the incident in its entirety which led up to the arrest."

"The Coral Springs Police Department believes in transparency," the department wrote. "It is important for people to have all of the facts before rushing to judgment of an officer's actions when faced with calls for service involving violent suspects — regardless of their age or gender."

According to police, security at Coral Square Mall had called officers about "unruly teens who had been harassing patrons and causing a disturbance" on the property. When they arrived, mall security claimed one of the female teenagers in the group had been seen "striking another teen patron." Another shopper told officers that one of the teens had "shoved" her young child "to the ground." In response, the Coral Springs Police Department said the officers issued the teens a trespassing warning and barred them from the mall.

Police said that before the responding officers had left the mall, the group of teenagers had returned, at which point the officers once again approached them. "One of the male teens was taken into custody without incident," police said. "As a result, the female teen seen in the video, began cursing, attempting to incite the other teens."

The department claimed the teen "began to fight and resist arrest" when the officers attempted to arrest her. "Due to her stature and aggressive behavior, officers took her to the ground attempting to get her to release her fists," police said. "As seen in the video she resisted arrest, and in order to have her to comply she was struck in the side to release her clenched fists — she was then handcuffed."

The Coral Springs Police Department also claimed that the teen "violently kicked one of the officers" as they placed her in the patrol car. According to police, the girl was transported to a local Juvenile Assessment Center (JAC), known more commonly as juvenile hall.

But in a statement to WSVN 7News, Jessica Dennis, the teen's mother, has pushed back on the police department's narrative. "She clearly wasn't aggressive. Everyone could see she was laying there," Dennis said. "I just want justice to be served."

More like this
How The City Healed Five Years On From The Manchester Arena Attack
By Ella Glover
Michigan’s Governor Is “Going To Fight Like Hell” To Protect Abortion Access
By Andrea Zelinski
How To Fight For Reproductive Rights, Based On How Much Time You Have
By Courtney Young
Kris Jenner’s Advice For Kim Kardashian Is Going Viral On TikTok
By Courtney Young
Get Even More From Bustle — Sign Up For The Newsletter