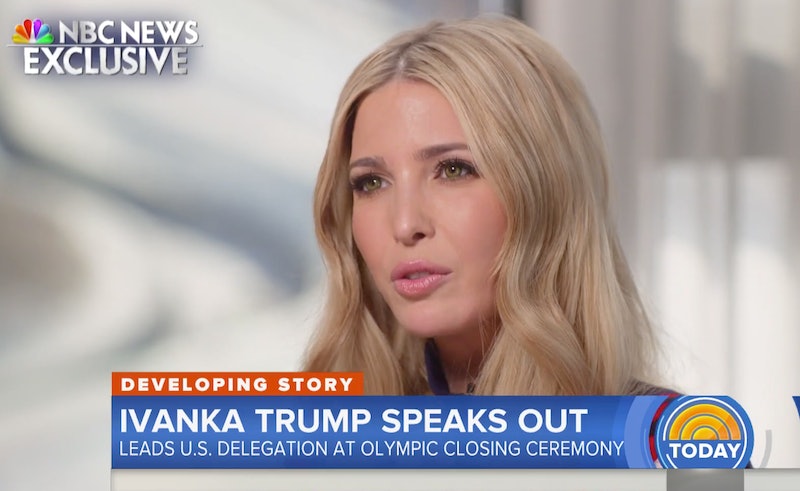 After claiming it's "inappropriate" to ask a daughter about her father's alleged sexual misconduct, Ivanka Trump said she believes the president's denials. President Trump has vehemently denied 19 women's accusations of sexual misconduct since they first started speaking out about his alleged behavior during the 2016 election. His daughter has largely remained quiet on the issue, but video of Ivanka Trump's response to questions about her dad's accusers in an interview with NBC News that aired Monday morning was pretty awkward to watch.

"I believe my father. I know my father," the first daughter said when NBC's Peter Alexander asked if she believes her father's accusers. "So I think I have that right as a daughter to believe my father." Ivanka Trump also said that Alexander shouldn't ask her about the sexual assault and harassment allegations.

I think it is a pretty inappropriate question to ask a daughter if she believes the accusers of her father when he has affirmatively stated that there is no truth to it. I don't think that's a question you would ask many other daughters.

The White House previously called Trump's accusers liars, and the president lashed out at one of them, Rachel Crooks, on Twitter last week after she continued to tell her story was on the front page of The Washington Post.

Crooks says Donald Trump kissed her without consent at Trump Tower in 2006 — a story she has repeated over and over since 2016. However, Trump continues to deny kissing her.

"A woman I don't know and, to the best of my knowledge, never met, is on the FRONT PAGE of the Fake News Washington Post saying I kissed her (for two minutes yet) in the lobby of Trump Tower 12 years ago," he tweeted last week. "Never happened!"

The president further insinuated that Crooks was paid to lie about him — "Why doesn't @washingtonpost report the story of the women taking money to make up stories about me?" In response to his tweets, Crooks urged Trump to release the surveillance tapes from the 24th floor residential elevator bank in Trump Tower from the morning in question. "Let's clear this up for everyone," she said.

The sexual misconduct allegations concern many female Democrats in Congress, who wrote a letter in December calling for a congressional investigation into Trump's behavior. The letter said Trump "has boasted in public and in crude terms that he feels at liberty to perpetrate such conduct against women," referenced the infamous Access Hollywood tape. It was the first official action taken by members of Congress regarding the sexual misconduct allegations, but the House Oversight Committee did not launch an investigation.

President Trump's eldest daughter hadn't publicly addressed the allegations until this week. Her comments about believing her father — and therefore disbelieving his accusers — differ from those surrounding allegations about other men. When Roy Moore was running for an Alabama Senate seat last year amid allegations that he sexually assaulted multiple women, she told the Associated press she believed Moore's accusers.

"There's a special place in hell for people who prey on children," she said. "I've yet to see a valid explanation, and I have no reason to doubt the victims' accounts."

Her father, on the other hand, gave Moore a full endorsement. "He says it didn't happen," President Trump said of Moore's sexual assault allegations. "You have to listen to him, also." (Moore ultimately lost the special election to Democrat Doug Jones.)

Ivanka Trump made it clear she doesn't want to be asked about the president's accusers. Nonetheless, she essentially gave the same defense of her father as he gave of Moore: She believes the president because he denies any inappropriate sexual behavior.

More like this
The Most Powerful Photos From The Weekend’s Abortion Rights Protests
By Melanie Mignucci
How 5 People Upended Their Lives To Fight For Abortion Rights
By Hannah Smothers
Boris Johnson’s Leadership Is In Question – Again
By Bustle UK
17 Powerful Photos From March For Our Lives Protests Across The U.S.
By Michelle Toglia
Get Even More From Bustle — Sign Up For The Newsletter