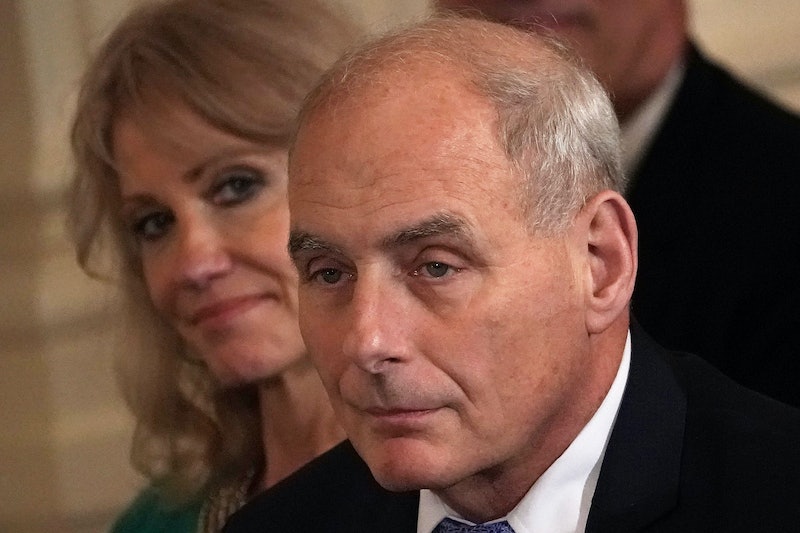 Sometimes our unfiltered reactions give us away. During a meeting with foreign delegations at the NATO summit in Belgium on Wednesday, an ABC News video showed President Trump bashing Germany as John Kelly, his White House chief of staff, reacted to the president's words silently — with his facial expressions.

Surrounded by officials, including NATO Secretary General Jens Stoltenberg, Trump said, "Germany is totally controlled by Russia because they will be getting from 60 to 70 percent of their energy from Russia in a new pipeline. You tell me if that's appropriate."

Kelly's gaze initially fell down the moment Trump said Germany was supposedly a captive under Russian rule. Then he looked back at Trump, and at this point, Kelly — who seemed visibly uncomfortable with the president's rant — squirmed in his chair, appeared to grimace, and looked away. Even The Washington Post took note of Kelly's tense body language, noticing the moments he squirmed in his chair and averted his gaze.

In a statement to the Post, White House Press Secretary Sarah Huckabee Sanders said that Kelly was "displeased because he was expecting a full breakfast and there were only pastries and cheese."

CNN described Trump's blistering commentary as "remarkable" given that the close alliance between the United States and Germany. If Germany takes Trump's diatribe to heart, it could affect relations between both countries. Of course, Stoltenberg pushed against Trump's criticism and said, "The strength of NATO is that despite these differences, we have always been able to unite around our core task to protect and defend each other because we understand that we are stronger together than apart."

Stoltenberg responded, "Because we understand that when we stand together also in dealing with Russia, we are stronger."

Trump continued to push against Stoltenberg's argument and said that Germany was giving away its financial assets to Russia. He kept calling the country "captive to" Vladimir Putin's nation. At this point, according to CNN, White House officials then asked reporters to leave the meeting.

It was such a charged exchange that later on German Defense Minister Ursula von der Leyen told CNN that Germany did not, in fact, depend on Russia for sustaining its country's affairs. The minister added that the country possesses "a very diverse mix of energy supplies" and that it was working on maintaining diplomacy between Russia and Ukraine.

German Chancellor Angela Merkel, too, responded to Trump's rant. According to an English translation of her response, Merkel said, "I wanted to say that, because of current events, I have witnessed this myself, that a part of Germany was controlled by the Soviet Union. And I am very happy that we are today unified in freedom as the Federal Republic of Germany."

The chancellor, who was born in 1954, added, "The first political event from my childhood that I remember distinctly is the building of the Berlin Wall 50 years ago. I was 7 years old at the time. Seeing grown-ups, even my parents, so stunned that they broke out in tears, shook me to the core. My mother's family, for example, was divided by the building of the Wall."

In such a country, Merkel said, "I grew up in the part of Germany that was not free, the German Democratic Republic. For many years I dreamed of freedom, just as many others did — also of the freedom to travel to the United States."

Based on Kelly's displeased body language, Stoltenberg's unapologetic response, and Merkel's pushback, it seems as if Trump's visit to Europe has left high-ranking officials uneasy and unhappy.