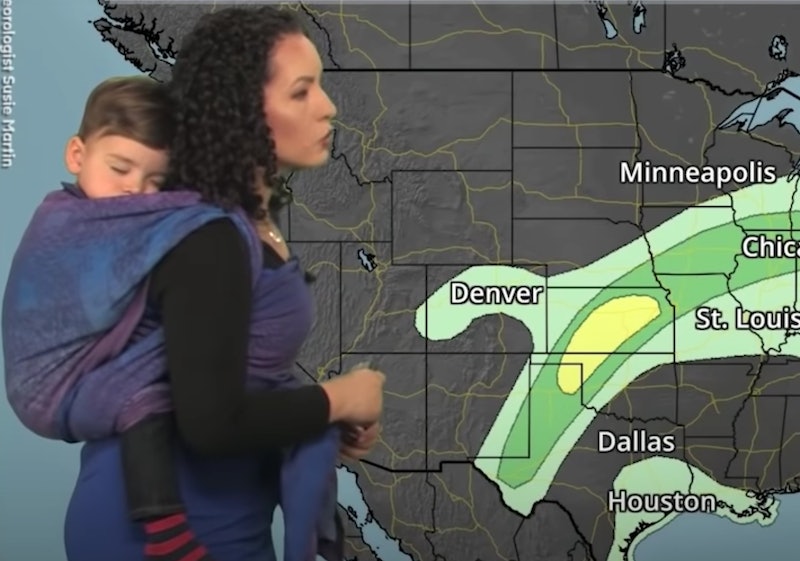 Bringing your child to work undoubtedly has its ups and downs, but for one Minnesota woman, it also has a purpose. A viral video of meteorologist Susie Martin toting her son during a weather report has made the rounds on social media, and the woman in question has said that she did so to help support October's "International Baby-Wearing Week."

"I wanted to promote this wonderful tool that's helped me as a mom and the bonding experience between mother and son," Martin told Good Morning America. "I suppose it's a way for the baby to be comforted. It was nice for me personally because I could multitask while comforting my child."

The footage in question was filmed on Oct. 5, she told the morning television show. And indeed, it shows Martin delivering the weather report with her son sleeping in a pouch on her back. He is 21 months old, according to ABC.

"It does make me feel like a mom that can be very capable of doing things," Martin told Good Morning America. "That's just the message that I love about it and I would say as a working mom, it's nice to be able to have this tool with me to help me do my job."

Many of the responses on Twitter were overwhelmingly positive. "Talk about multi-tasking! MOMS and DADS - how cool is this?!" tweeted WKBW 7 Eyewitness News reporter Katie Morse.

Martin is a meteorologist who works for Praedictix where, according to her Twitter bio, she is the director of operations. The company even shared a video of the weather report on their own Twitter account.

"Babywearing has been a passion of mine since my son came into my world," Martin wrote in a blog post for Praedictix. "It has been an invaluable tool for me as a mother and helped me and my son bond during the early stages of infancy. Not only that, but it was and still is incredibly liberating to be able to comfort my child whilst doing other tasks, which has helped me be a happier mom."

Organizers say that babywearing promotes happy, healthy babies, confident parents, loving caregivers — and is convenient to boot. The group even gives awards to those advocates who go the extra mile toward promoting the practice.

In the blog post Martin wrote for her employer, she made clear that she was proud to have been able to help promote the practice. "If I could inspire at least one parent to try babywearing and if it helped them even a fraction as much as it has helped me and my family," she wrote, "it would be well worth it."