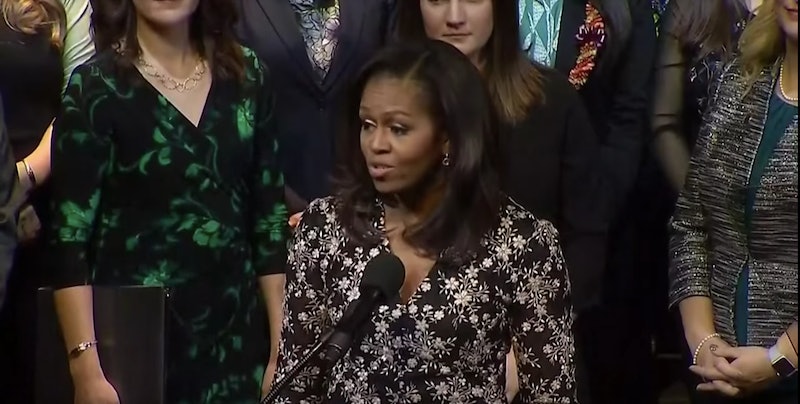 On Friday, the former first lady of the United States gave the first major address of her post-White House life. During an event at the Kennedy Center, Michelle Obama celebrated the importance of education in a speech saluting educators throughout the country, and including a subtle little jab at the current occupant of 1600 Pennsylvania Avenue.

Speaking to the assembled crowd, Obama said that the example set by educators throughout the United States is "what makes America great," a clear tweak on President Donald Trump's controversial and oft-criticized campaign slogan. She also talked about the problem of poor behavior being modeled at the highest levels of public life, and the potentially negative impact that could have on the behavior and character of America's children. Suffice to say it was pretty clear whose poor behavior she was talking about, even those his name never crossed her lips.

"Trust me, I know this work isn’t easy, especially right now,” the former first lady said, as People noted. “I know there’s a lot of anxiety out there. And there’s no denying our kids, what they see on TV, the kind of behavior being modeled in public life, that, yes impacts their behavior and their character."

Beyond the not-so-veiled shots at Trump, Obama also hailed the work of community educators and counselors, saying that they have a "far bigger impact" on the lives of children than whoever occupies the White House.

"Too often, we get caught up thinking that real change only happens through the White House, or by passing legislation, or signing some big executive order," Obama said. "We think that only the president or first lady can make big national statements, of shift culture, or impact public debate. And don't get me wrong, all that is critically important to bringing about change."

"But one thing Barack has always said, one thing we've both seen throughout our careers, especially throughout our time in the White House, is that real change doesn't happen from the top-down here in Washington," she continued.

"Real change happens from the bottom-up, in communities across this country, and that is particularly true when it comes to our kids. I firmly believe that the men and women on this stage, our counselors and educators, have a far bigger impact on our kids' lives than any president or first lady."

Obama has kept a relatively low profile since departing from public life last year, despite the fact that she's one of the most popular political figures in the country, according to polls. Her personal approval ratings at the conclusion of her time as first lady clocked in at 68 percent, outpacing those of her husband, and positively crushing those of the current president, who typically languishes in the high-30s.

Given her soaring popularity, as well as that peculiar American obsession with political dynasties, many Democrats and progressives have fantasized about the former first lady running for office herself someday. She has consistently denied that will ever happen, however, citing a lack of interest, and an unwillingness to subject her family to the national spotlight again.

For instance, she, her husband, and former vice president Joe Biden all have extremely positive approval ratings, and none of them are currently serving in government. As far as active politicians go, the most popular according to recent polling is Vermont senator Bernie Sanders, who is actually an independent, not a Democrat. In short, when you're out of power, it seems like it's a lot easier for people to like you, and people really liked Michelle Obama to begin with.