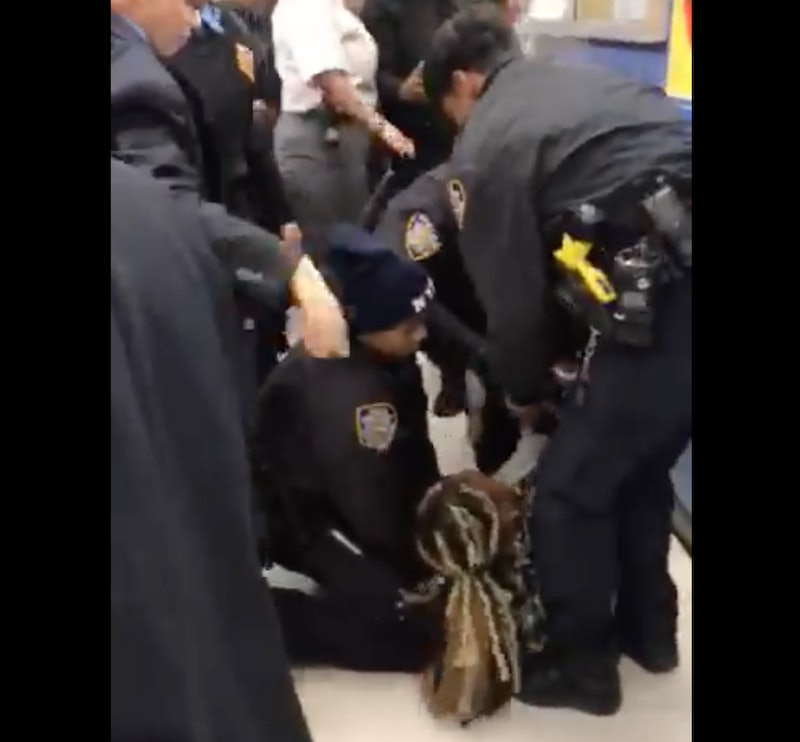 An encounter between a mother and the New York City Police Department (NYPD) at a Human Resources Administration office has sparked both intense public outrage and an internal review after video of the incident was shared online. In the video, NYPD officers pry a baby from his mother, at times repeatedly yanking on the young child before eventually drawing a stun gun.

Multiple NYPD officers can be seen forcibly tugging, yanking, pulling, and prying an small child from his mother's arms as they attempt to arrest her in a roughly two-and-a-half minute long video filmed Friday at a Human Resources Administration (HRA) office in Brooklyn. "They're hurting my son," the woman, whom police identified to Bustle as Jazmine Headley, can be heard screaming repeatedly as NYPD and HRA officers crowd around her.

According to the Facebook user who shared the video, the incident started when Headley opted to sit with her child on the floor in the corner of the office as there were no more available chairs. They told ABC & Eyewitness News that although Headley wasn't blocking any doors or passageways by sitting in the corner, a security officer told her she had to stand.

When Headley refused to stand back up, more security was brought in and NYPD was called. While it's unclear exactly how Headley's confrontation with the responding NYPD officers began, video of the encounter shows at least four officers grappling with her and her child as they attempt to arrest her. At one point, one officer repeatedly yanks on the child as onlookers scream in apparent shock and outrage. A few seconds later that same officer can be seen pulling out a yellow stun gun and pointing it first at the gathering crowd and then at Headley.

According to the NYPD, officers were called to respond to reports of "harassment" at the Human Resources office in Brooklyn's Boerum Hill area "after office staff and HRA peace officers made unsuccessful attempts remove [Headley] from the facility due to her disorderly conduct towards others, and for obstructing the hallway."

NYPD tells Bustle that Headley was arrested and charged with resisting arrest, acting in a manner injurious to a child, obstructing governmental administration, and criminal trespass. But the way Headley's arrest went down has sparked anger, frustration, and criticism from the public at a time when police around the country are already being accused of brutality and using excessive force against unarmed citizens.

"This is unacceptable, appalling and heart breaking," New York City Council Speaker Corey Johnson wrote in a tweet commenting on the video. "I'd like to understand what transpired and how these officers or the NYPD justifies this."

Brooklyn Borough President (and NYPD veteran) Eric Adams has demanded that all charges related to the incident be dropped against Headley and called the incident an example of "excessive policing" in a statement released Monday. "Something's terribly wrong when the most well-trained police department can't resolve a dispute with a mother and child without looking like @RealDonaldTrump's southern border strategy," Adams tweeted. "We must do better."