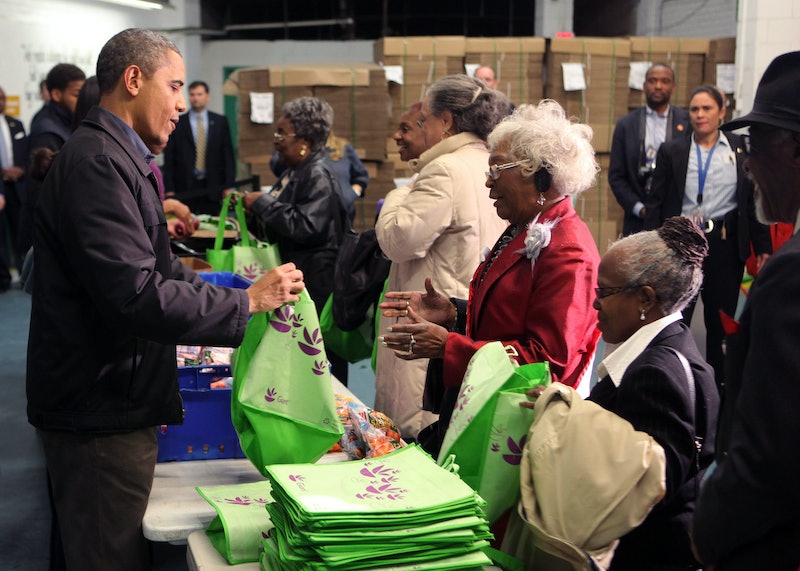 On Tuesday, former president Barack Obama brought smiles to the faces of many as he spent some time in his hometown of Chicago, Illinois. Indeed, video of Obama at a Chicago food bank delivers a heartwarming message about the importance of serving others, especially as Thanksgiving approaches.

Obama spent part of his Tuesday at the Greater Chicago Food Depository, a nonprofit organization that distributes food to hundreds of food pantries and shelters throughout Cook County. As The Hill reported, the former president joined volunteers as they were preparing food prior to Thursday's Thanksgiving holiday.

Both Obama and the Food Depository shared a video of the 44th president's visit on Twitter. In the clip, the former president, wearing jeans and a Sox cap, chats with volunteers as he bags potatoes. Toward the end of the video, he tells a pair of young girls volunteering at the organization, "You guys are doing such a great job helping out. I’m really proud of you."

In sharing the video on Twitter, the Food Depository thanked the former president for his visit — and stressed the importance of working to end hunger. As the organization tweeted:

Thank you to ⁦@BarackObama⁩ and ⁦@ObamaFoundation⁩ for joining our volunteers today at the Food Depository. We believe no one should go hungry, especially this time of year, and that’s why we’re working to address the root causes of hunger in Chicago and Cook County.

In his tweet about his visit, Obama thanked the food pantry for the work they do throughout Chicago. "Thanks to the Chicago @FoodDepository team for all you do and to the volunteers who are doing great work and let me crash today," the former president wrote. "Happy Thanksgiving, everybody!"

Obama and his wife, Michelle, have frequently expressed their commitment to working to end hunger in the United States and around the world, as the Global Citizen reported. In 2010, the Obama administration launched the Feed the Future Initiative, which committed billions of dollars to combating hunger and increasing food security around the world. Obama also signed the Global Food Security Act in 2016, which created a comprehensive strategy for U.S. foreign assistance to improve global food security. In the United States, Obama's administration made an official commitment to reducing food waste by 50 percent by 2030.

The former first lady, Michelle, has also been committed to improving health through nutrition. She planted the White House Kitchen Garden to help encourage fruit and vegetable consumption. She also helped secure the passage of the Healthy, Hunger-Free Kids Act of 2010, which set new nutrition standards for schools in the United States.

Volunteering at food banks over Thanksgiving also constituted a hallmark of Obama's presidency. Along with his family, the former president often spent part of the holiday weekend distributing food at Washington's Capital Area Food Bank.

It's certainly apparent that, in his post-presidency period, Obama has remained committed to the ideals and initiatives he supported throughout his time in office. This is reflected in his continued dedication to serving others, including through supporting organizations that work to end community hunger.