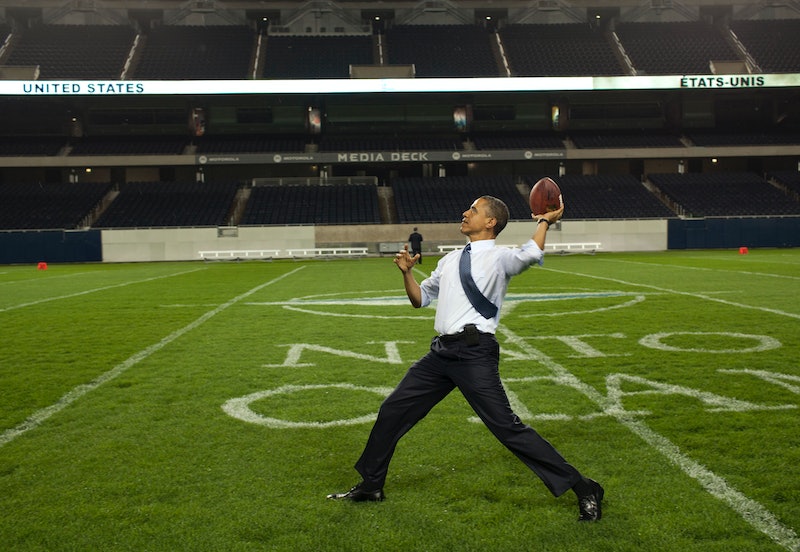 The Washington Nationals Youth Baseball Academy's after-school program received a surprise — and pretty athletic — guest on Thursday. According to The Huffington Post, a video of Barack Obama playing football with kids shows the former president enjoying a good dose of sports and sharing some wisdom with young players later on.

On Twitter, the academy shared a video of an enthusiastic Obama playing the role of a quarterback in a football game. After effortlessly throwing the football across the fairly large field, Obama laughed, "Touchdown! That was a great catch." At one point, you can also see Obama striking a baseball out of the field to the cheers of the crowd.

The former president also gave his young audience a pep talk. Standing in the middle of excited kids, Obama said, "If you guys work hard in school and listen to your coaches, you guys are going to do great things. Alright?" According to Today, the Washington Nationals Youth Baseball Academy helps teach leadership and character skills to underserved students in the Washington D.C., area.

"So, I’m going to be on the lookout for you," Obama told the young boys and girls. "I think you’re going to do something important. You guys are going to make a real difference. We're going to be really proud of you."

For years, Obama has supported sports for kids, especially how it impacts young girls. In 2012, Obama talked about the National Collegiate Athletic Association's women's basketball games and how Title IX played a critical role in making sure women athletes had as much of a chance at succeeding in sports as their male peers did.

In 2012, Obama emphasized the role team sports played in building young girls' self-esteem, according to the Women's Sports Foundation. While speaking with journalist Andy Katz (who worked with ESPN at the time), Obama said, "I am a huge believer that sports ends up being good for kids, and especially good for girls. It gives them confidence, it gives them a sense of what it means to compete."

While Obama has encouraged children to participate in sports, he has also been clear about the need for safety. In 2014, the former president carried out a public awareness program about head-related injuries in sports, especially football.

At the time, according to the White House, Obama said that the idea wasn't to scare people off from letting their children participate in games. "We want our kids participating in sports," Obama said in 2014. "I’d be much more troubled if young people were shying away from sports. As parents, though, we want to keep them safe, and that means we have to have better information."

On Thursday, once again showing his love for sports, Obama turned to Instagram where he shared the video of him playing football and baseball with the kids. "I had a blast with all these extraordinary young people," his caption said. "Thanks for letting me drop in."