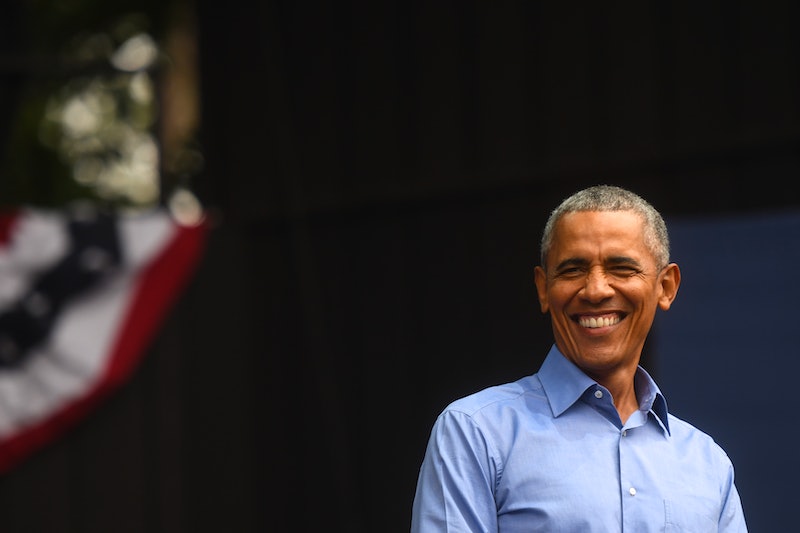 If you've ever wanted to see a video of Barack Obama wearing a Santa hat and giving presents to kids, today's your lucky day. Obama made a surprise visit to a children's hospital in Washington D.C. on Wednesday, the Washington Post reports, where he handed out gifts, posed for photos, chatted with kids one-on-one and generally delighted residents and staff.

"I just wanna say thank you to all of you guys," Obama said during his visit. "To have nurses, staff, and doctors, and people who are caring for [the children], and looking after them, and listening to them, and just there for them, and holding their hands — that's the most important thing there is. What a great reminder of what the holiday spirit is supposed to be all about."

According to the Post, Obama's visit was a secret to all but a select few staff members of Children’s National Hospital. But word traveled quickly over the course of his 90 minute visit, and when he was leaving, a crowd of staff gathered by the door, gave him an enthusiastic applause, and burst into a rendition of "We Wish You A Merry Christmas."

“I know [the children] will be talking about it for years to come,” Kurt Newman, chief executive and president of Children’s National Health System, told the Post. “At such a busy time of year, when no one wants to be in the hospital, his natural warmth lifted the spirits of those kids, their parents and of each staff member he met along the way.”

Obama later sent a tweet thanking the hospital for having him.

"Merry Christmas and happy holidays to the extraordinary kids, families, and staff at Children’s National," the former president tweeted. "And thanks for humoring me as your stand-in Santa."

According to the Post, Obama first visited a group of kids who were making snowflakes in a playroom, where he handed out Hot Wheels sets, remote-control cards, glittery nail polish and jigsaw puzzles, noting that the latter was a favorite pastime of his late grandmother. He also had some one-on-one meetings with patients, and gave some sage advice to a 12-year-old who was feeling anxious about high school: "Even the cool kids don’t have it all figured out."

Obama even took some selfies with the patients, breaking his self-imposed "no selfie" rule that he announced in 2017. And In case any of the hospital's staff didn't catch him while he was there, Obama recorded a video message to be played internally for employees before he left.

Children's National is a well-respected hospital in the D.C. area and nationwide. In June, was ranked in the top ten pediatric hospitals in several categories by US News & World Report, which named it the best pediatric hospital for neonatal care in the country. In December 2016, Michelle Obama stopped by the hospital for a surprise visit of her own, where she — and, for some reason, Ryan Seacrest — read holiday stories to the kids.