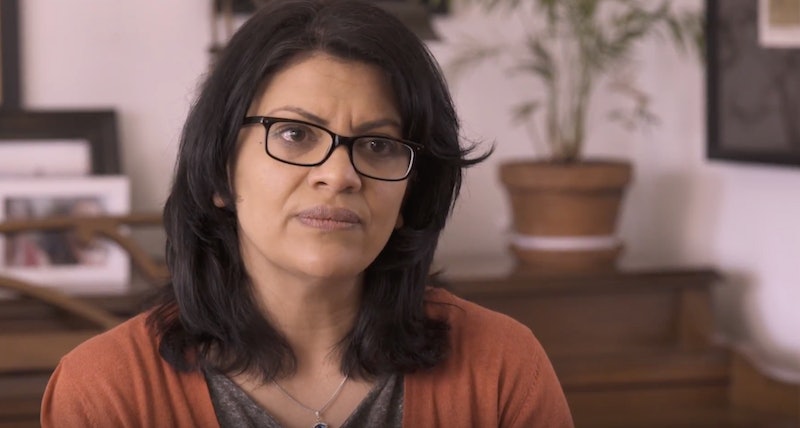 One of the dozens of women who won their party's nomination to run for the U.S. House is likely to be the first Muslim woman ever elected to the Congress. And she's likely not to arrive quietly if past events are any indicator. Rashida Tlaib was kicked out of a Donald Trump event during the 2016 election. She wasn't sorry then, and will likely remain a strong anti-Trump voice.

Tlaib won the Democratic nomination in a primary against five other Democrats who were vying for the seat of retired Rep. John Conyers, who stepped down after a string of sexual harassment allegations came to light in November 2017 (he has denied the allegations). Tlaib did not win the special election that would have sent her to D.C. sooner, but as the Democratic nominee for the November election for the seat, she is likely to win as there is no official Republican challenger.

Tlaib's open anti-Trump past was first reported in the Detroit Free Press in August 2016, when the presidential campaign was in full swing, and when Trump was touting campaign promises about banning Muslims from entering the country and when his feud with the Khan family was in full swing. Khizr Khan, whose son was killed in action, challenged Trump to read the Constitution at the Democratic National Convention.

After the news broke at the time — that a former state legislator had been ejected from the Trump event — Tlaib decided to address the issue head-on in an op-ed for the Free Press.

"I have heard critics calling it unbecoming of a former state legislator. Well, I believe it is unbecoming of any American to not stand up to Trump’s hate-filled rhetoric and tactics," Tlaib wrote. She said that she was thinking more about other identities when she protested the event. "American, parent, Muslim, Arab-American, and woman," she wrote.

Tlaib wrote that she was convinced that speaking out was the "patriotic" thing to do:

Courteous behavior can’t be reserved for someone who labels hardworking Mexican immigrants who have come to pursue the American Dream as “rapists.” Social niceties are not in order for men who would turn away refugees fleeing for their lives based on their faith to have them suffer in camps. And complacency is not warranted for a presidential candidate who denigrates a mother and father who have lost their child in the ultimate sacrifice of military service.

Since then, Tlaib has not backed down. In July she was on the streets in Detroit to protest the Trump travel ban ruling. The Supreme Court kept the travel ban intact. Tlaib said it wasn't just a ruling and said it increases "outrage, violence, and hate toward other Americans."

Her outspokenness is here to stay. "As a responsible parent who continues to reflect and read the criticisms of my actions," she wrote in her op-ed, "I think of my two boys and I remind myself: silence is not an option and it never should be."

And now she likely won't just be a parent speaking her mind, but a member of Congress, too.