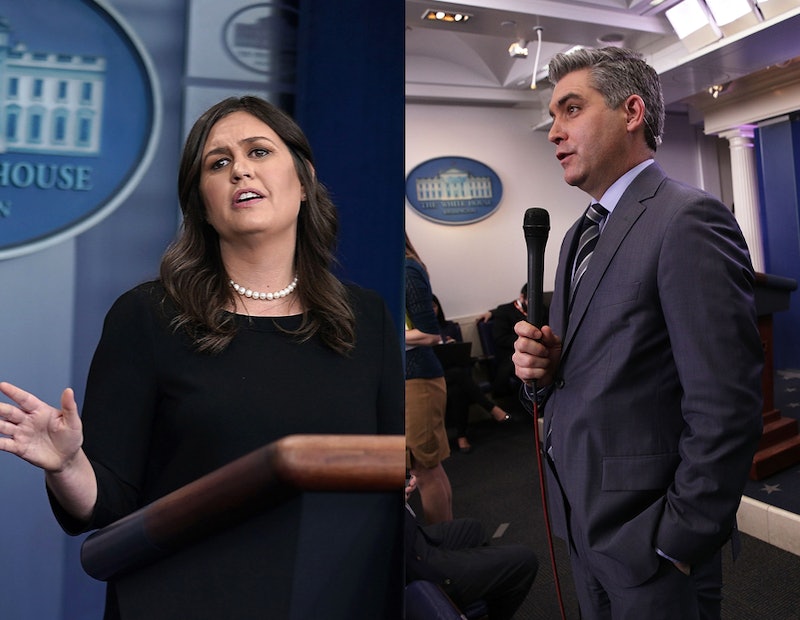 If you missed coverage of the White House press conference on Monday, video of Sarah Sanders debating Jim Acosta over Trump's "fake news" comments will definitely catch you up to speed. The back-and-forth occurred just hours after CNN reported intercepting its third suspicious "package" in a week.

Acosta, a CNN reporter, started the interaction on Monday by pointing out the irony of calling journalists "enemies of the people" when they are being physically threatened with suspicious packages. And, as was the case back in June, Sanders continued to vehemently support Trump's comments against the "fake news media" the second time around.

Acosta said to Sanders on Monday, "Shouldn't you reserve the term 'enemy' for people who are actually the enemy of the United States, rather than journalists?"

When Sanders clarified that Trump was specifically "calling out" the growing amount of "fake news" outlets, not any specific journalists, Acosta replied, "Can you state for the record which outlets that you and the president regard as the enemy of the people?"

"I'm not going to walk through a list," Sanders said, "But I think those individuals probably know who they are."

Amid growing commentary from the press corps, Acosta replied:

From there, it somehow became even more tense — and surprisingly personal. Sanders then lashed out at CNN as an organization, telling Acosta, "I think it's irresponsible of a news organization like yours to blame responsibility of a pipe bomb [on the president] ... not just on the president, but blame members of his administration for those heinous acts. I think that is outrageous, and I think it's irresponsible."

It's unclear whether Sanders was referring to any specific CNN article, though it's true that CNN has published several on Donald Trump and the mail bomb campaign. One pointed out the mail bomb suspect's van was covered with Trump/Pence stickers. Another was as a sharp criticism by former New York City Mayor Michael Bloomberg to Trump, where he warned that there are "consequences to words" and added that he believed POTUS is "inciting people" rather than unifying them.

Sanders additionally could have been referencing an article written by Chris Cillizza, the editor-at-large of CNN, last week, which declared that the mail bomb campaign was the "logical conclusion of our poisonous political environment."

No @PressSec, CNN did not say @realDonaldTrump was directly responsible for the bomb sent to our office by his ardent and emboldened supporter. We did say that he, and you, should understand your words matter. Every single one of them. But so far, you don’t seem to get that.

On Monday evening, Trump took to Twitter to seemingly respond to the argument between Sanders and Acosta. He wrote, "Check out tweets from last two days. I refer to Fake News Media when mentioning Enemy of the People - but dishonest reporters use only the word 'Media.' The people of our Great Country are angry and disillusioned at receiving so much Fake News. They get it, and fully understand!"