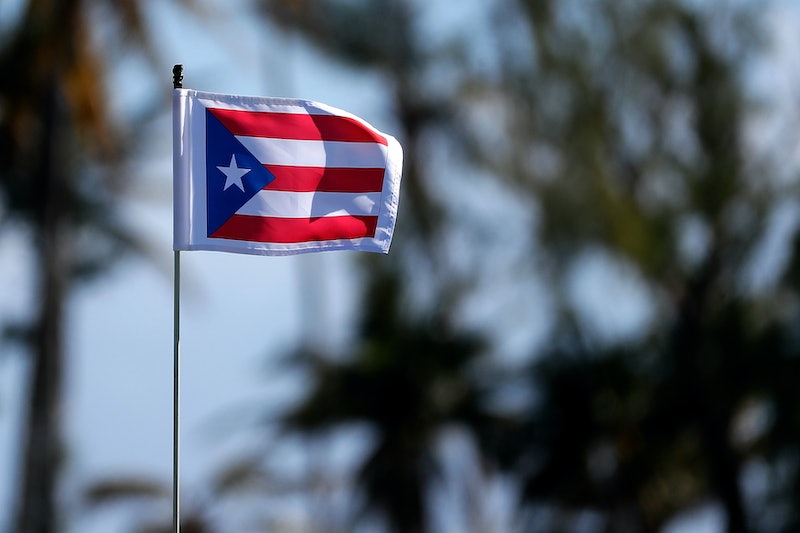 Puerto Rico is part of the United States — but don't tell that to the man who was recorded harassing a woman for wearing a Puerto Rico shirt and accusing her of being "un-American" for doing so. A video of the encounter, which took place in June, has recently gone viral — in large part because it depicts a nearby park officer ignoring the woman's repeated requests for assistance as the man in question berates her.

The 36-minute video was filmed by Mia Irizarry, a Puerto Rican woman who was at a Chicago park for a friend's birthday party. Since its release, the police officer from the video has been moved to desk duty and placed under investigation, according to the Cook County Forest Preserves. In the video, a man is seen confronting Irizarry about her shirt, which has an image of the Puerto Rican flag on it.

“Why are you wearing that?” the man, who CBS News reporter David Begnaud has since identified as Timothy Trybus, shouts.

“Because I can,” Irizarry responds. She then turns to the nearby police officer, who also hasn't been identified. “Officer, I am renting this area and he is harassing me about the shirt that I am wearing," she says. But the officer doesn't respond, and the man continues shouting at her.

“This is the United States of America, you are not renting this,” he says.

“I did rent this, I have a permit,” Irizarry responds. “Can you please step away from me, sir?” But the man doesn't step away, and instead gets in Irizarry's face.

“You’re not going to change us, you know that?” he yells.

“I am not trying to change anyone," Irizarry says. "I am just trying to come here for a birthday party."

“Yes, I am," Irizarry responds.

“Then you should not be wearing that,” he says. Puerto Rico, of course, is a U.S. territory, and Puerto Ricans are U.S. citizens.

Irizarry asks the man to step away from her, then again requests help from the nearby officer.

“Officer, I feel highly uncomfortable," Irizarry says. "Can you please grab him?" However, video of the encounter shows the officer in question ignoring Irizarry, and instead walking away from the scene. Irizarry asks him several more times to step away from her, but he continues ranting and shouting at her.

"You're not American," the man incorrectly says. "If you were American, you wouldn't wear that. You know that right?"

On Monday, the Forest Preserves of Cook County addressed the incident on Twitter, and said that the officer in question has been reassigned and placed under investigation.

"We are aware of the the June 14 incident and video," the Forest Preserves wrote in a series of tweets Monday. "After the incident, we immediately launched an investigation pursuant to our personnel policies into the response of our officer. The investigation is ongoing and the officer involved has been assigned to desk duty pending the outcome. The intoxicated individual involved in the incident was arrested and charged with assault and disorderly conduct." The video does not appear to show the man assaulting Irizarry, but does later depict him in a physical altercation with another unnamed man.

Puerto Rico Gov. Ricardo Rossello has also weighed in on the incident, writing on Twitter that he is "appalled, shocked & disturbed by the officer’s behavior."

"No one should feel unsafe while visiting our preserves," the department wrote on Twitter.