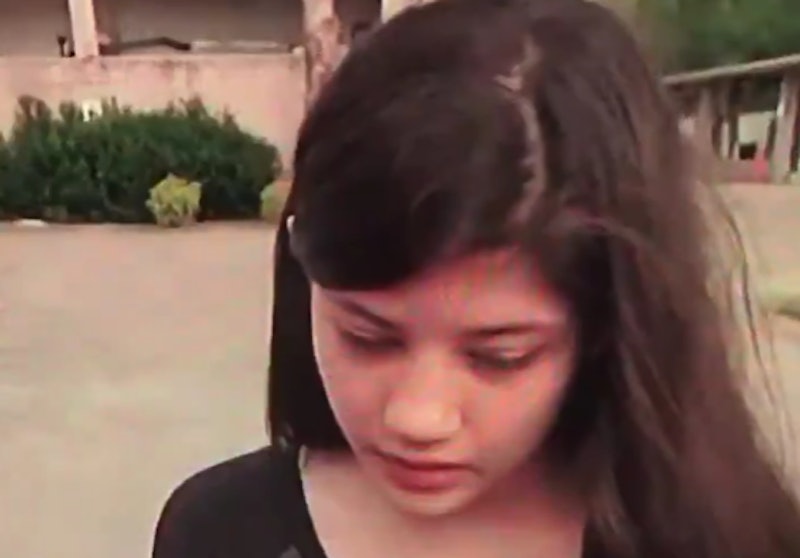 @ChargeTheMoundx/Twitter
By Chris Tognotti
May 18, 2018

Yet another mass shooting took place at Santa Fe High School in Texas Friday, leaving several students dead and more injured. And in the aftermath of the attack, a student at the school spoke to the press, and she made a grim and poignant statement about the whole thing ― you should definitely watch this video of a Santa Fe survivor who believed shootings like these would happen at her school someday, because they've been "happening everywhere."

The student, whose name is Paige Curry, was interviewed by Houston affiliate ABC 13 in the immediate aftermath of the shooting. She said that she didn't know why the shooter would do what they did, and she also made it clear that she wasn't necessarily shocked that this kind of mass violence had arrived at her school, because such shootings have become so common in recent years.

"Was there a part of you that was like, this isn't real, this would not happen in my school?" the reporter asked the high school junior.

"No, there wasn't," Curry answered. "It's been happening everywhere, I felt ― I've always kind of felt like eventually it was going to happen here, too. So... I don't know. I wasn't surprised, I was just scared."

Curry also described the experience of hiding in the school while the shooting was taking place; she says that she managed to stay calm, despite what a frightening experience it was.

"I was very, very scared. I had to have someone to keep me calm," she said. "I managed to keep calm through it all. There was another girl who was just freaking out; they were struggling really hard to keep her calm. It was really scary." Curry also described calling her mom on her cell phone as the shooting began.

According to CNN, a law enforcement source speaking on condition of anonymity said at least 10 people were killed in the shooting. Subsequently, Texas Governor Greg Abbott confirmed that 10 people were slain, and 10 more were injured. Harris County sheriff Ed Gonzalez has also told the media that the shooter is believed to have been a student; two people have reportedly been taken into police custody.

It's very important to remember, however, that early reports in the aftermath of violent, chaotic incidents like these can often prove highly unreliable. What's not in dispute, however, is that multiple people were killed in the attack.

Many of the students of Santa Fe High School themselves protested against gun violence just last month, during the April 20 school walkouts that took place across the nation. Those walkouts were spurred by the survivors of the Marjory Stoneman Douglas High School shooting in Parkland, Florida, in February; many of the activist survivors of that shooting responded to the Santa Fe attack on social media on Friday.

The March for Our Lives ― the huge protest event that took place in Washington, D.C. in March ― also put out a statement following the shooting, expressing condolences and support for the survivors.

"We are deeply saddened by the tragedy at Santa Fe High School and send our love and support to the families affected as well as the entire community," the group's statement said, noting that this is the 22nd school shooting of 2018. "Santa Fe, we are with you, and we will do whatever we can to support you as the days go on."

More like this
'The Capture' Is Finally Back – & S2 Looks Tense AF
By Sophie McEvoy and El Hunt
Scotland's First Period Dignity Officer Has Sparked Backlash
By Darshita Goyal
25 Things I've Reduced My Life To, In Addition To WFH In My PJs
By Ginny Hogan
Kylie Jenner Was Almost Named After *Another* Iconic American Family
By Grace Wehniainen
Get Even More From Bustle — Sign Up For The Newsletter