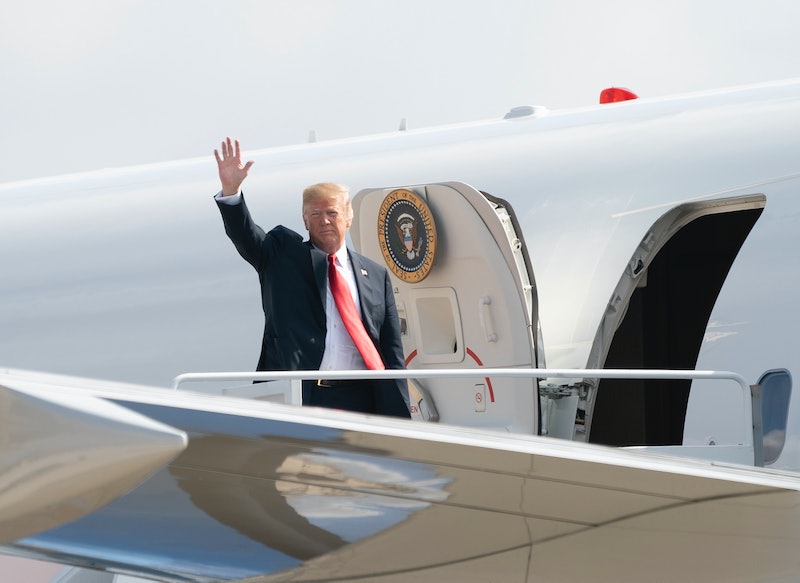 In a week consumed by a fraught Supreme Court confirmation battle, you could probably use a little levity. To that end, on Thursday, a video of Trump boarding Air Force One with toilet paper apparently stuck to his shoe surfaced. And it's everything you imagined.

The clip first shows the president getting out of a limousine. It's parked directly in front of a staircase that leads up to the open door of Air Force One. Secret Service agents are milling around the car as Trump climbs the stairs... with a little white scrap trailing off his left shoe. He stops to wave at the top of the stairs, then enters the plane, leaving the scrap outside the entrance.

There's no way to know it was in fact toilet paper — or even how it got there — but Twitter users seemed convinced.

"I honestly cannot believe it’s taken this long for Trump to board Air Force One with a full strand of toilet paper trailing from his shoe," one person tweeted.

"How’s that for a metaphor?" someone else chimed in.

Scott Dworkin, co-founder of the Democratic coalition joined in as well, retweeting the video seemingly as an appeal for senators to reject the Kavanaugh nomination. ".@realDonaldTrump-Take the toilet paper off your shoe. #VoteNo," Dworkin tweeted.

The president is keeping a packed travel schedule leading up to the November elections, with rallies in six different states planned in just 10 days. The intense campaign schedule is meant to drum up support for GOP candidates before the midterms, which threaten to replace Republican majorities in Congress with a wave of Democrats. Trump's apparent toilet paper gaffe likely occurred during his Thursday trip to Minnesota, where he visited Rochester for a "Make America Great Again" rally to support Republican Jim Hagedorn in the race for Minnesota's First Congressional District.

The president's midterm campaigning tactics appear to center on criticizing Democrats with claims that any Democratic win will bring violence and crime. During his Minnesota rally, for example, Trump accused Hagedorn's opponent, Dan Feehan, of wanting to make the state a "sanctuary for the criminal aliens," and blamed Democrats for trying to take away health insurance coverage for preexisting conditions. According to CNN's fact check, in reality, 20 Minnesotan Republican lawmakers signed on to a federal lawsuit to get rid of the Affordable Care Act, which protects preexisting conditions.

Trump also lashed out against Democrats for slowing the Kavanaugh confirmation process, saying their "rage fueled resistance is starting to backfire." The crowd responded with their support for the nominee, chanting, "We want Kavanaugh." Above all, Trump returned to tried-and-true rallying cries, from complaining about NFL players kneeling during the national anthem to the chants of "lock her up," referring just as they did in 2016, to Hillary Clinton.

But Feehan views Trump's presence in Minnesota as a hopeful sign in his congressional race. “For us, nothing has changed,” he said in an interview with CNN. "We take it as a good sign that we are doing something right and he has to take a day to campaign here.”