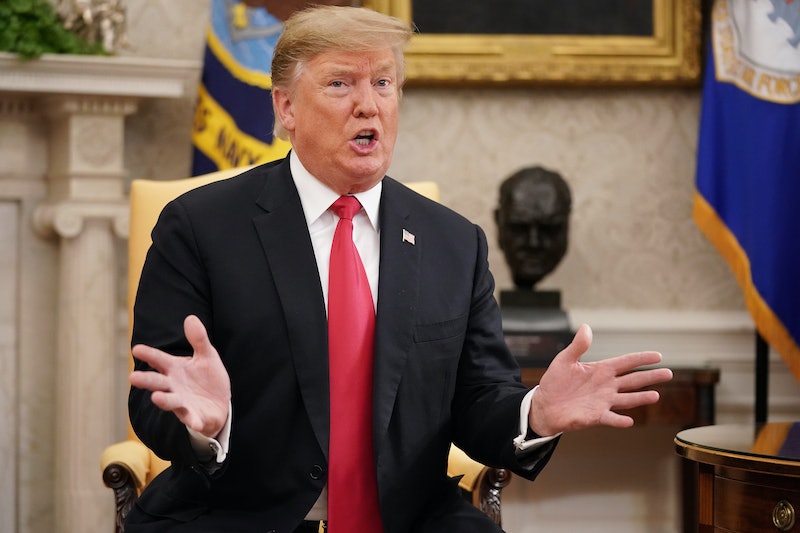 Though the veracity of POTUS' statements is often challenged, video of Trump saying his dad was born in Germany is especially hard to swallow. The president has made this claim three times so far, according to The Washington Post, his most recent taking place on Tuesday. It's a bold move by the president, given that multiple publications debunked this claim a long time ago, confirming that Fred Trump was born in none other than the United States.

Per The Post, Trump's third and most recent claim came on Tuesday when he was speaking to reporters. He said, “My father is German — was German. Born in a very wonderful place in Germany, so I have a great feeling for Germany.”

However warm this sentiment may be, it's factually inaccurate. As The Post pointed out in December 2016, and The Guardian reiterated in July 2018, it was Trump's grandfather, Friedrich Trump, who was born in Germany. Specifically, The Guardian reports that Friedrich was born in Germany, left the country for a while, came back, was kicked out for skipping military service, then finally settled in New York, where his son, Fred, would eventually be born.

It's worth noting that his grandson, too, has faced controversy over his alleged evasion of military service: Trump has been accused on several occasions of dodging the draft for the Vietnam War. In an interview with The New York Times, Trump argued in 2016 that he had a "temporary" issue with bone spurs that prevented his eligibility.

Despite the fact that Trump's father was confirmed to be born in the United States, the president has maintained at various points that he is a first-generation American. In July 2018, Trump said in an interview with CBS News:

Maybe the thing that is most difficult — don't forget both my parents were born in E.U. sectors, OK? I mean, my mother was Scotland, my father was Germany. And — you know I love those countries.

That same month, Trump also said at a news conference during the NATO summit:

I have great respect for Germany; my father is from Germany. Both of my parents are from the E.U., despite the fact they don’t treat us well on trade.

Trump has addressed these discrepancies in the past, to an extent. According to The Times, Trump did acknowledge the confusion over his grandfather's heritage during a Trump Tower interview years ago, answering a question over whether his father pretended to be Swedish by saying, “Is that true? I don’t know.” He later added that he and his father did talk about concealing their German heritage because his father "didn't want to put any pressure” on any of their Jewish friends, though he didn't explain further.

Trump has yet to explain his reasoning behind the mix-up over where his father was born.