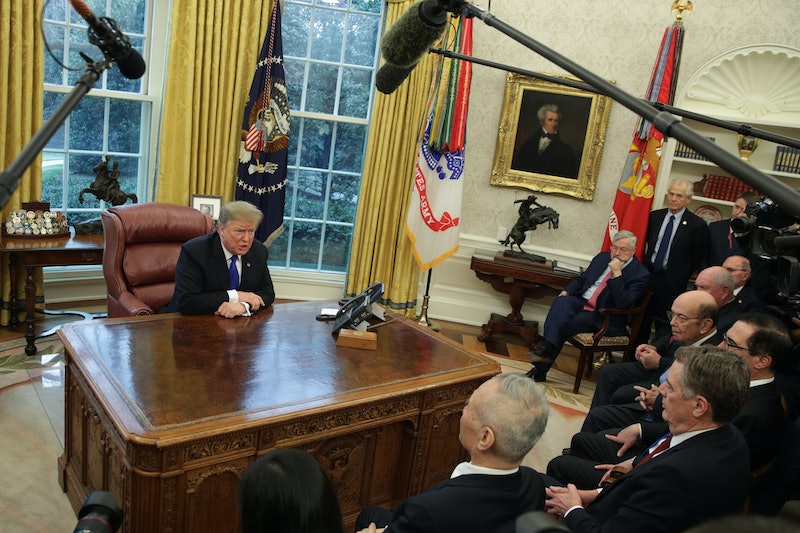 Late last week, President Donald Trump publicly disagreed with U.S. Trade Representative Robert Lighthizer over terminology used to describe a prospective trade deal with China, prompting a back-and-forth between the two men. Video of Trump's Oval Office meeting on trade showed China's Vice-Premier laughing during the argument, which largely revolved around word choice, according to footage of the interaction.

At the heart of the issue between Trump and Lighthizer was Lighthizer's use of the term "memorandum of understanding," sometimes referred to as an MOU, according to multiple reports about the meeting. The president balked at the term, according to video clips, arguing that he didn't believe that they "meant anything."

When it comes to trade agreements, MOUs function as preliminary agreements between the involved parties, stating an expressed intent for how they want their relationship to move forward. Typically, they are signed before a final, long-term agreement is reached. However, Trump took issue with the concept during his Oval Office meeting, in front of Vice-Premier Liu He.

Lighthizer responded that an MOU is "a binding agreement between two people," before turning around to explain their function to those gathered behind him, including members of the media. He described MOUs as a legal contract, but Trump interjected.

When Trump interjected, according to video footage, China's Vice-Premier is heard laughing, although the exchange continues. However, at this point, Lighthizer appears to adopt the president's preferred terminology. Turning to Liu and others in the room, Lighthizer announced that they would no longer refer to a preliminary agreement as an MOU.

“From now on, we’re not using the word ‘memorandum of understanding' anymore,” he said. “We’re going to use the term ‘trade agreement'... We’re never going to use MOU again.”

Derek Scissors, of the American Enterprise Institute, told Bloomberg that there was a tactical reason for using an MOU in this situation. Part of it could have been politically-oriented.

“The Trump administration originally chose MOUs because no truly binding agreement can be made on the exchange rate or large future purchases of corn, much less technology coercion China denies has ever happened,” he said to the outlet. “If the administration switches to calling it a binding trade agreement, members of Congress will want to vote on it. If they don’t get to, this looks exactly like Obama not wanting Congress to vote on the Iran nuclear deal.”

Whether or not the word choice will have a long-term impact on the prospective agreement remains unclear.