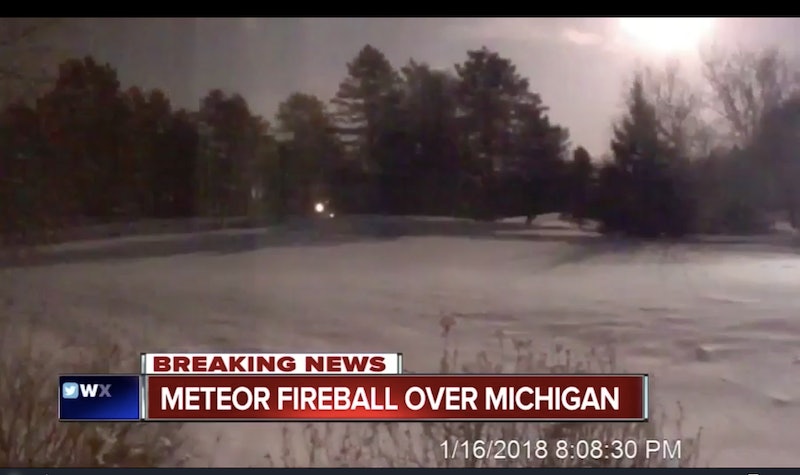 On Tuesday evening, bright lights and a loud bang suddenly flashed across the sky in several states, surprising residents. As it turns out, the incident was actually a suspected meteor in the Midwest — and this video shot by a resident in Michigan illustrates the power and beauty of the celestial event.

The video was first shared by a local TV reporter in Detroit, who indicated that a viewer had sent the footage in. The clip features a large orb of light appearing to come down from the sky, then quickly bursting and disappearing. Many people across the Midwest, including Michigan but also in Ohio, Illinois, and Wisconsin, also shared similar videos, with many wondering exactly what was happening.

Indeed, many residents began to call 911, concerned for their safety after hearing and seeing the meteor. The flood of 911 calls prompted Ingham County's Office of Homeland Security and Emergency Management in Mason, Michigan to issue a Facebook post and text alert at around 8:30 p.m. ET saying that the event was likely a "fireball meteor" and that there was no need to contact emergency services. The post also indicated that there were no signs of damage from the suspected meteor and that the "bang" sound residents heard was likely the sound of the meteor breaking up.

At around 8:30 p.m. local time, the National Weather Service (NWS) of Detroit similarly issued a tweet indicating that the event was "likely" a meteor, though, at the time, the agency was waiting on official confirmation. At approximately 10:30 p.m., the NWS issued a follow-up tweet saying that the United States Geological Survey (USGS) had, in fact, confirmed that the incident was a meteor that occurred around 8:10 p.m. ET — and that the meteor actually caused a 2.0 magnitude earthquake.

According to the American Meteor Society, a "fireball" meteor is a meteor that is "very bright." The society indicates on its website that the brightness level of a fireball is usually stronger than magnitude -4, which constitutes the same magnitude as the planet Venus.

Those on social media were certainly very intrigued by the meteor, as hashtag #meteor was trending shortly after the occurrence. A variety of users accross the Midwest shared their own experiences and reactions to the event.

Some on Twitter expressed gratitude that they had witnessed the rare event, with one user noting, "Just saw a meteor streak across the sky just now. It was followed by loud booms about 3 minutes later. Bright blue and orange fire. So glad I saw it!!" Another user also joked that finding out more information about the meteor had consumed her entire evening, saying, "I had every intention of being productive tonight, but then a #meteor flew over #Detroit and I'm suddenly a meteorologist."

Others on social media lightheartedly shared their reactions to the event. One user noted that he was glad he "survived" the "#MichiganMeteor2018." Another user revealed his shock at the initial "bang" of the meteor, saying, "Thought I was having a stroke, paired with burglars stomping on my roof and an earthquake. Luckily it was just space debris exploding upon entry #PureMichigan#Meteor."

Still others noted their surprise that there was no advance warning of the event, with one user asking, "... If a meteor can light up the sky and shake the ground from Cincinnati OH, north to Flint,MI and from St'Joseph,MI to Windsor ON, don't you think we should have gotten a heads up to something that big? No one seen that coming?"

Tuesday's meteor event will certainly be something that many across the Midwest remember, both through their own experiences as well as via the many powerful video clips and photos of the event.