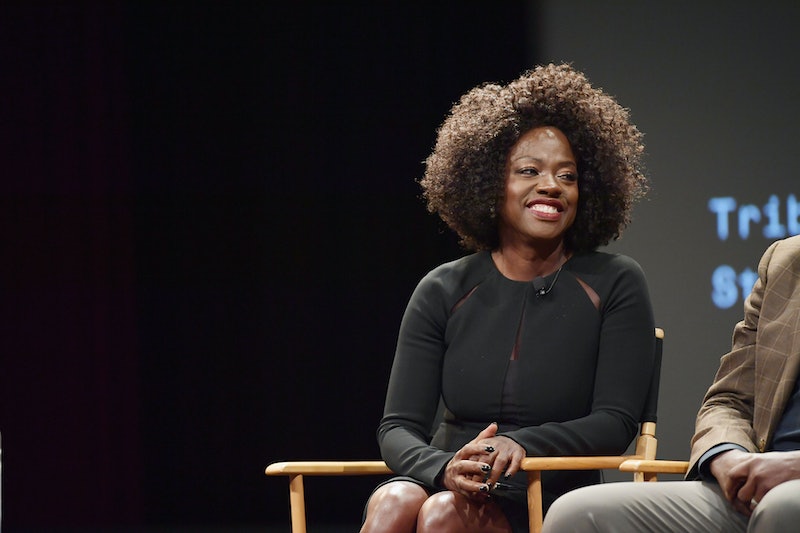 Along with being a phenomenal actor who has appeared in big franchises, on stage, and a very successful run in TV, Viola Davis is also very vocal when it comes to injustice in the industry. She's known for her inspiring speeches when she wins yet another award, or when she's fighting for something she believes in, like at the Women's March. Now, as the actor prepares for the release of her newest film, Widows, Viola Davis is speaking out about the power of natural hair for black women, and the importance of regarding race when talking about pay equity in the workplace.

According to a new feature in Variety, Davis was surprised when she learned that her leading character in Widows, Veronica Rawlins, would not be wearing a wig to cover up her natural hair. Director Steve McQueen, who was also at the helm of Academy Award-winning 12 Years a Slave, reportedly told Davis "Your own hair is beautiful — just wear it that way." He wanted to be realistic and saw nothing in having Davis wear her hair naturally.

To Davis, this was a "social statement." She said that women of color are taught to dislike their hair. Especially for black women, "the kinkier it is, the so-called nappier it is, the uglier it is,” Davis said. And yet, in this film, one of her first major leading roles on the big screen since The Help, it was her own natural hair that was celebrated.

This isn't the first time Davis has celebrated her natural hair on screen. In a memorable scene on How To Get Away With Murder, her character Annalise Keating took off her wig in a moment of vulnerability and unmasking that came from the actor herself. "I wanted to see a real woman on TV," she said during a For Your Consideration panel in 2015, as reported by Vulture.

“We’re into a zeitgeist where people are fighting for their space to be seen,” Davis told Variety. “People have to know that there are different types of women of color. We’re not all Foxy Brown. We’re not all brown or light-skinned beauties with a big Afro. We have the girl next door. We have the older, dark-skinned, natural-haired woman.”

On top of advocating for more diversity of women on screen, Davis also used the interview to shed light on the pay disparity in the industry. And not just wage gaps between men and women, but also those gaps between women of color and white women. “There are no percentages to show the difference,” said Davis. “It’s vast. Hispanic women, Asian women, black women, we don’t get paid what Caucasian women get paid. We just don’t. … We have the talent. It’s the opportunity that we’re lacking.”

Davis' comments reflect a 2018 study published by the Ralph J. Bunche Center for African American Studies at UCLA. The study, which reviewed film and television properties released in 2016, found that while 40 percent of the nation consisted of minorities at the time, only 13.9 percent of film leads were minorities, as reported by Variety.

The way to fix this dilemma? Davis told Variety that it starts at the top. “We’re not even invited to the table,” she says. “I go to a lot of women’s events here in Hollywood, and they’re filled with female CEOs, producers and executives, but I’m one of maybe five or six people of color in the room.”

By playing roles like the one in Widows, ones that shatter stereotypes, Viola Davis is bringing her seat to the table and proving her worth as a lead actor. And she's doing it all while staying true to herself, and her natural hair.