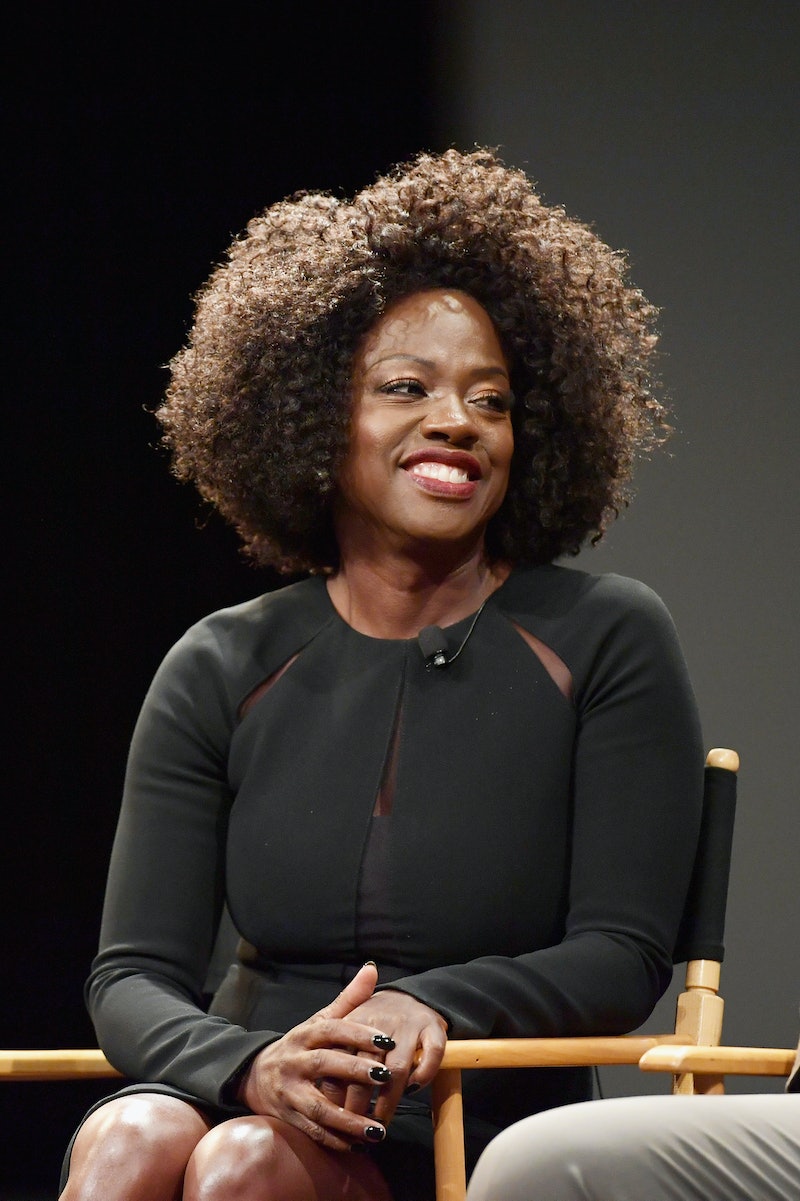 The actor may have earned an Oscar nomination for playing the maid Aibileen Clark, but, looking back, Viola Davis regrets her role in The Help. The actor revealed her surprising change of heart in an interview with The New York Times published Tuesday, and while some fans might be surprised, the actor's reasoning actually makes a lot of sense. Davis told the outlet that while her experience working on the project was a good one, she lamented the fact that the 2011 film focused so tightly on the white experience instead of taking the prime opportunity to elevate black voices.

The 53-year-old just finished promoting her new film, Widows, at the Toronto International Film Festival, but much of her conversation with the NYT focused on her past. In response to a question about career regrets sourced from the outlet's readers, Davis acknowledged that she might have made different choices with the benefit of hindsight. "Have I ever done roles that I’ve regretted? I have, and The Help is on that list," she said.

Davis starred as Aibileen in the Oscar-nominated film, based on the Kathryn Stockett novel of the same name, and the actor even picked up a Best Actress in a Leading Role nod for her portrayal of the black maid working deep in the heart of the segregated South in the 1960s (her first and, so far, only nomination in that category). But while the plot centered around black maids working for white families, the story was ultimately told through the lens of a white character — Emma Stone's Skeeter Phelan.

As fans may recall, Skeeter sets out on a mission to collect the stories of the black women working in her community for a book. And, while a large part of the film is focused on the black female characters Skeeter interviews, most notably Aibileen and Minny Jackson (Octavia Spencer), in the end, they don't have control over their own stories, Skeeter does. As a result, the exploration of their experiences barely broke the surface, something Davis noted in her interview:

“I just felt that at the end of the day that it wasn’t the voices of the maids that were heard. I know Aibileen. I know [Octavia Spencer's character] Minny [Jackson]. They’re my grandma. They’re my mom. And I know that if you do a movie where the whole premise is, I want to know what it feels like to work for white people and to bring up children in 1963, I want to hear how you really feel about it. I never heard that in the course of the movie.”

Looking back, it's true that the film never really fulfilled its promise to emphasize those stories, instead giving prominence to Skeeter. And while Davis is likely proud of the work she did on-set, it sounds like if she was handed the script now, she'd likely either pass on the feature or use her platform to push the film into that richer territory.

That's not to say that Davis didn't enjoy her time working on the film. The Oscar winner emphasized that subject matter and its treatment aside, she got extraordinarily lucky with the team she worked with on The Help. Davis told the outlet:

“The friendships that I formed are ones that I’m going to have for the rest of my life. I had a great experience with these other actresses, who are extraordinary human beings. And I could not ask for a better collaborator than [writer and director] Tate Taylor."

And while it's great that her on-set experience was a good one, it's equally great that Davis is speaking openly about her regrets. The fact is, The Help could have done a better job for their black, female leads. And, it is also true that the bar for representation and authenticity in storytelling has been set considerably higher in the seven years since The Help was made. In hindsight, it's perfectly reasonable for Davis to say she might regret making the movie.

At the end of the day, audiences should just be grateful for Davis setting higher standards for the roles she'll accept in her own career. After all, we are the ones who get to watch her do it.

More like this
How Andrea Riseborough Got Nominated — & Almost Disqualified For An Oscar
By Jake Viswanath
12 Years Ago, Austin Butler Manifested His Oscar Nom In This Disney Movie Scene
By Jake Viswanath
Paul Mescal’s Family Celebrated His Oscar Nomination In The Sweetest Way
By El Hunt
2023 Oscar Nominations List: 'Everything Everywhere All At Once' Leads With 11 Nods
By Jake Viswanath
Get Even More From Bustle — Sign Up For The Newsletter
From hair trends to relationship advice, our daily newsletter has everything you need to sound like a person who’s on TikTok, even if you aren’t.