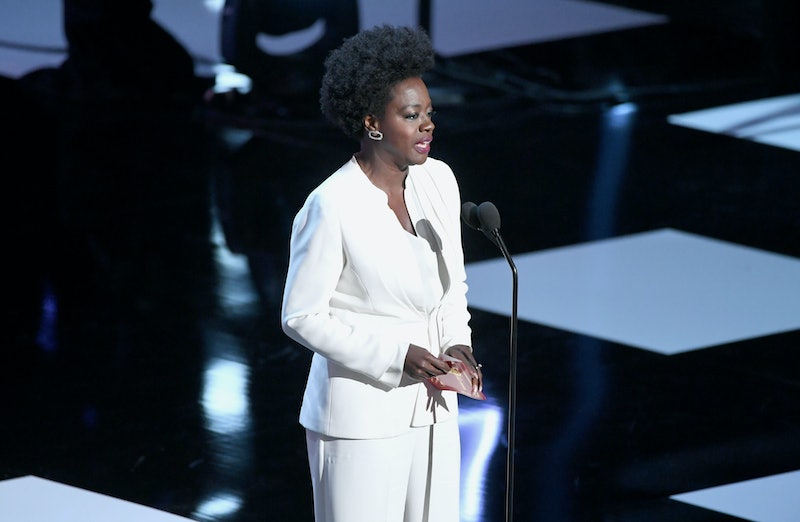 When actor Viola Davis learned she had prediabetes, she tells Bustle her diagnosis “woke me up.” Even though many women in her family had had diabetes, the How to Get Away with Murder actor realized she had gotten too busy to take care of herself. A routine blood test told her that she had prediabetes, which means your blood sugar levels are higher than normal, a precursor to Type 2 diabetes. It was this personal connection and call to action that led her to take on the challenge of narrating A Touch of Sugar, a new documentary from pharmaceutical company Merck that highlights the lives of the 30 million people in the U.S. with diabetes.

“Whenever you have a personal connection to a piece that you’re doing, it becomes easier to feel passion for it,” Davis tells Bustle. She says she felt moved by the profiles of people who were living with diabetes, like one woman whose son was diagnosed at 11 years old. “Because her son was diagnosed it made her take care of her own diabetes,” Davis says. “And the only thing I could think about were all the women in my family who got the ‘sugar’.”

Around 84 million people in the U.S. live with prediabetes, according to the CDC, and 90% of those people don’t know they have it. Prediabetes happens when your blood sugar level is elevated; this happens when insulin, a hormone that converts the sugar in food into energy, isn’t doing its job properly, or if your body isn’t making enough insulin. Type 1 diabetes is when your body doesn’t produce insulin, according to Healthline, while Type 2 diabetes is when your body doesn’t respond to insulin. Having prediabetes can lead to Type 2 diabetes, while Type 1 diabetes is a result of your body’s immune system attacking insulin-producing cells. Both kinds of diabetes can show up as fatigue, being very hungry or very thirsty, having blurred vision, or having cuts that don’t heal well, according to the Mayo Clinic, and both kinds of diabetes can lead to complications like heart disease, nerve damage, skin conditions, or depression.

A Touch of Sugar hopes to break stigma and increase education around this disease. “I didn’t choose to have diabetes,” one subject says in the trailer for the documentary, which premiered at the Tribeca Film Festival. The website for the film also has resources and information about how to live with prediabetes and diabetes.

“There is an aloneness that comes with this disease diagnosis,” Davis says. “If your knowledge is very shallow and your level of self-care is null and void, then you're basically left with nothing. But when you have advocates, you have a health care advocate, you have family members helping you with your diet and exercise, a health care provider, [you can] manage this very complicated disease.”

“I'm always trying to look back in the past,” Davis says. “If my aunt Betsy or my grandmother or any number of relatives who actually had diabetes, if they were given that level of support, how would the story have been different?”

Today, there’s a lot more visibility around the disease, and a lot more resources on how to manage it. You can learn more by visiting the documentary website, or talking to your doctor about how to prevent and manage the illness.