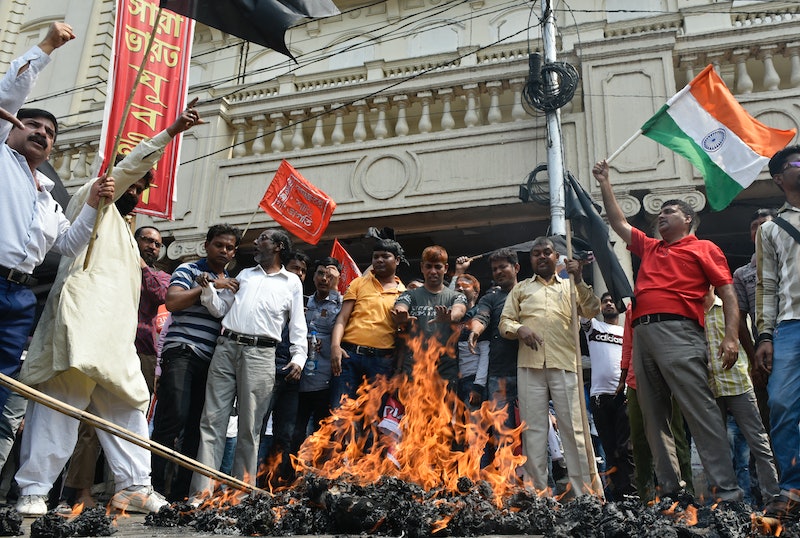 The past week has seen hundreds injured and dozens killed in India's capital city, Delhi, after mobs took to the streets in the name of religion. Muslims have been primarily targeted by members of Delhi's Hindu population, reports the Observer, and residents have been forced to flee their homes. Here's everything we know so far about the violent outburst.

What has been going on in Delhi?

More than 40 people have been killed in brutal riots that overtook the city for four days, the Observer reports. Groups of Hindus have reportedly set Muslim businesses, mosques, and properties on fire, dragging people out of their homes to beat and murder them. (Violence was seen on both sides, notes the paper.)

Sharif, the brother-in-law of one of the victims, told the Observer his relative was pulled out into the street. "The children ran out, too, and were screaming. His daughter, Kushi — she is just 11 — fell on the feet of those men, pleading, 'Don’t kill my father.' She tried to save him but they beat him to death in the middle of the street and threw him in the gutter.”

Other mobs were forcing male citizens to show their ID cards. Those who refused were told to take off their trousers to prove if they were circumcised; a common tradition for Muslim men. Hospitals in the region said they'd seen hundreds of people who'd been attacked with guns, acid, and other weapons.

As the BBC reports, much of the violence is believed to have originated near Shiv Vihar on Sunday Feb. 23. It took mere hours for the rioting to spread across the city. While some Sikh and Hindu families tried to help their Muslim neighbours, per the Observer, many Muslim families were forced to flee.

However, protests have been ongoing in Delhi for some months. Back in December 2019, the government shut down internet and text services to prevent people organising, Reuters reports.

Why are people rioting?

It's all to do with a new citizenship law that was passed in December 2019. It granted Indian citizenship to religious minorities from Pakistan, Afghanistan, and Bangladesh, except for Muslims, per the BBC. This legislation is the latest in a long history of religious conflict in the country.

As the Observer explains, the 1947 partition, which saw the formation of Pakistan as a separate Muslim state, caused an astronomical loss of life. But one political party is being blamed for pitting Hindus against Muslims in recent years: the Bharatiya Janata Party (BJP). Elected in 2014 and again in 2019, their leader (now Prime Minister) Narendra Modi has been accused of pushing a hate-filled ideology, leading to widespread rioting and hundreds of deaths.

But it's the citizenship amendment that seems to have triggered this particular bout of violence. Although peaceful protests occurred at first, Harsh Mander, director of Delhi's Centre for Equity Studies, told the Observer that the BJP "orchestrated" the recent brutality. BJP politician Kapil Mishra encouraged a Hindu mob to tackle protesting Muslims, reports the paper, and fake news stating that mosques in Delhi were loudly announcing the removal of Hindus from the city caused further animosity.

How has the Indian government responded?

The Indian government has denied any involvement in the riots. On Twitter, government spokesperson Raveesh Kumar said any such reports "are factually inaccurate and misleading, and appear to be aimed at politicising the issue."

On Feb. 26, Prime Minister Modi tweeted: "Peace and harmony are central to our ethos. I appeal to my sisters and brothers of Delhi to maintain peace and brotherhood at all times. It is important that there is calm and normalcy is restored at the earliest."

Citizens were, however, concerned at the lack of police action, per the Observer. Delhi's police, controlled by a BJP minister, are accused of failing to help people in need by allowing violence to continue and blocking ambulances. Their investigation into the riots has focussed on Muslim leaders in the city, rather than any member of the BJP.