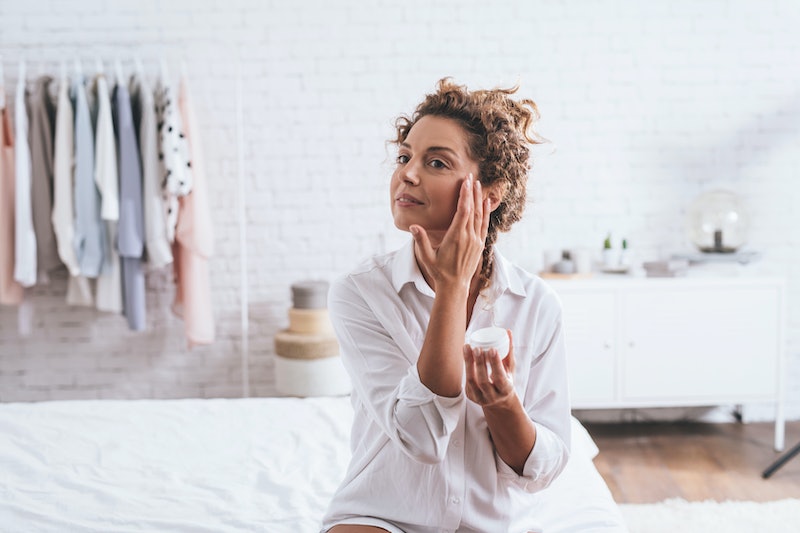 If you find yourself getting ready with strangers in the morning, you might be doing more than watching a "Get Ready With Me" or "Morning Routine" video. According to a viewer, the oddly fascinating and voyeuristic morning routine videos on TikTok are anxiety-reducing.

"I am most anxious in the morning, and having a routine helps me put one foot in front of the other," Katie, 27, a newfound #morningroutine devotee, tells Bustle. "I never used to have a routine, but after watching so many of these videos, I've picked up little ideas here and there and created my own," she says. Watching someone complete "really basic tasks, like watering a plant, or making coffee," she says, helps to keep her aspirations in-check. "I watch some of these videos, and I'm like, OK, at the very least I can make my bed, or do some stretches."

The trend has been popular on YouTube and Instagram for years, but the videos have become a recent staple in the For You Page on TikTok. Videos with the hashtag #morningroutine have over 900 million views and videos with the hashtag #getreadywithme have over 262 million views. Google Trends show that after peaking in August 2019 and dropping off the charts for a while, the trend is working its way back up to peak popularity as of the first week of June. So why now?

According to clinical therapist Caroline Given, L.C.S.W., these videos provide structure that people desperately need right now. "People are looking for some framework," Given says, explaining that with schedule and routines uprooted by the pandemic, people are starting to realize that there's room for anxiety to enter (or re-enter) the equation. "We have no basis for what is normal right now. Watching how someone else structures their time give us some concept of what 'normal daily life' could look like," Given explains, adding that "it’s almost self-parenting in a way." Plus, there's the entertainment value. "These videos are relaxing, they are enjoyable and calming to watch," Given says.

Most of the original videos all have a similar format. They start out with a bed-making montage in an immaculate room. Then they transition into a spa-like skin care routine. Next, is an elaborate breakfast preparation. And last, a light yoga flow. And it's all to the tune of a royalty-free, easy listening song.

But lately, the morning routine videos have been getting less produced and more real. Shot on iPhones, some videos start out with the creator waking up in a messy room, spending time on their phone, rushing through a skin care routine, making a less than artful breakfast, and dropping crumbs on their keyboards as they pour over emails and then spending even more time on social media. To Given, the range of content acts almost as a generous template for what is normal. People are watching these videos to see how they measure up.

"While there is a lot of negative comparison that takes place over social media, I think routine videos can be a catalyst for positive comparison," Given says. If you see someone else waking up in a bed of mismatched sheets and starting their day with a microwavable breakfast burrito, you feel less pressure to live that performative pristine influencer lifestyle.

"The American obsession with productivity and career or academic success has set up an unrealistic standard for what is actually achievable in a day," Given says. "Many people feel as if they’re constantly failing because they never cross off all the items on their to-do lists, even when those lists were never viable to begin with." But watching another person go through their routine gives you "a more human prototype for what you can achieve." You're not starting off the day with the impossible in front of you.

When another person’s routine mirrors our own, it’s encouraging and validating, she says. "It's a signal that we don’t have to feel ashamed for not being a productivity robot," Given says. Watching these kinds of videos can be inspirational, motivating people to put more time or thought into their self-care routine, or fill their mornings with more mindful choices. "Historically, routines were predominantly shaped by our family culture and passed on from one generation to the next," Given explains. Social media has broadened our scope, in a good way. "It gives us more options for how we might structure our daily lives in ways we might never have thought of on our own," she says.

Whether you enjoy watching the videos for the mere entertainment value, and the satisfaction of seeing someone achieve a simple task, or you're watching them to inspire you to complete your own tasks, Given says it's a "healthy and helpful resource."

More like this
Ashamed Of Your Screen Time Stats? Here's How To Change That
By Alexis Morillo
How To Turn Off TikTok Profile Views So You Can Stalk Other Accounts In Secret
By Alexis Morillo
Why We Love Investigating Friendship Breakups
By Carolyn Steber
An Expert Weighs In On The Viral Raw Carrot Salad Trend
By Alexis Morillo
Get Even More From Bustle — Sign Up For The Newsletter
From hair trends to relationship advice, our daily newsletter has everything you need to sound like a person who’s on TikTok, even if you aren’t.