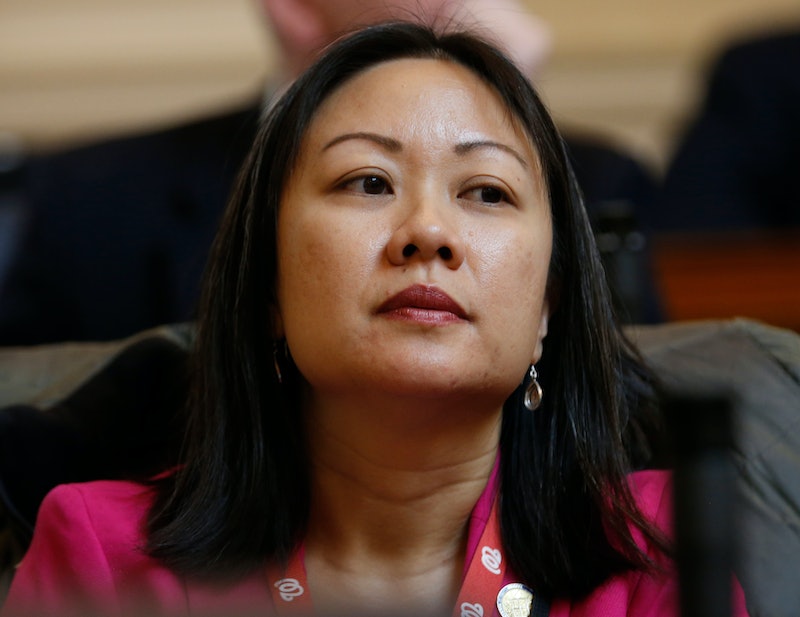 As controversy continues to stir around a measure that would loosen restrictions around late-term abortions in Virginia, the lawmaker behind the legislation has faced increasingly vicious backlash. The Virginia abortion bill sponsor, Kathy Tran, received death threats this week, The Washington Post reported on Friday, and has sought extra security measures for her and her family.

According to the Post, Tran has been getting the threats on the phone, and through social media and email. She's struggled with how to discuss the situation with her kids, the Post reported, who are in elementary school. "It's a very tough conversation to have with your little ones about how they need to be safe and watch out for themselves, and that it's okay to ask for help," Tran told the Post. "I love my kids dearly. They are my world, and their safety is my number-one priority." Bustle has reached out to her office for additional comment.

Tran, who has represented the 42nd District in the Virginia General Assembly since last year, introduced the abortion bill in January. The measure would allow women in the second term of their pregnancy to have abortions in clinics, instead of obligating them to go to hospitals. It would also adjust some of the requirements around third-term abortions. Currently, these procedures are only allowed if the mother's health would be "substantially and irredeemably" threatened, and Tran's bill would remove those terms from the legislation.

The measure would also allow women to get the procedure after one physician signs off on it, instead of three doctors' approval as current law requires. George Mason University's Dr. Bonnie Stabile told Bustle last week that the three-doctor rule can pose an "undue burden on a woman's access to abortion," and that it "undercuts a woman's autonomous decision-making capacity by suggesting that she is unfit to make such a decision on her own behalf in consultation with her personal physician."

Although Tran's bill makes relatively few changes to the existing law, her testimony to Virginia's House of Delegates went viral this week and stirred backlash from conservatives. On the floor on Monday, Del. Todd Gilbert asked Tran whether her legislation would allow a woman to get an abortion while she is "dilating" and about to give birth. "My bill would allow that, yes," she replied.

Tran told the Post that her comment at the time wasn't clear enough. "I should have said: 'Clearly, no, because infanticide is not allowed in Virginia, and what would have happened in that moment would be a live birth,'" she told The Washington Post. "I wish that I was able to be more agile in that moment," she added. "I misspoke, and I really regret that."

In fact, Tran's legislation would make no change to the period within which a woman may legally get an abortion in Virginia. She reiterated that fact in a video posted to her Twitter account on Thursday, explaining, "What I have done is try to make sure that women are able to make these decisions and access these services in a timely manner."

The Democratic Party of Virginia shared with ThinkProgress an audio clip of a death threat it received following Tran's remarks. The caller used a racial slur against Tran and threatened murder with a reference to the movie The Shining. Some right-wing commentators have been accusing the delegate of trying to legalize infanticide as well. Tran briefly deleted her Twitter account in the initial wake of the backlash, according to the Richmond Times-Dispatch.

Tran told The Washington Post that she hopes "a civil discourse" can be restarted over the issue. "We must be able to continue to listen to one another," she said, "and not just shout and base things off of 30-second clips."

Heidi Sieck, the co-founder of #VOTEPROCHOICE, released a statement of support for Tran on Friday, declaring that the delegate "should be applauded for her leadership." Sieck added, "We must elect, support and defend Delegate Kathy Tran and prochoice champions like her across the nation."