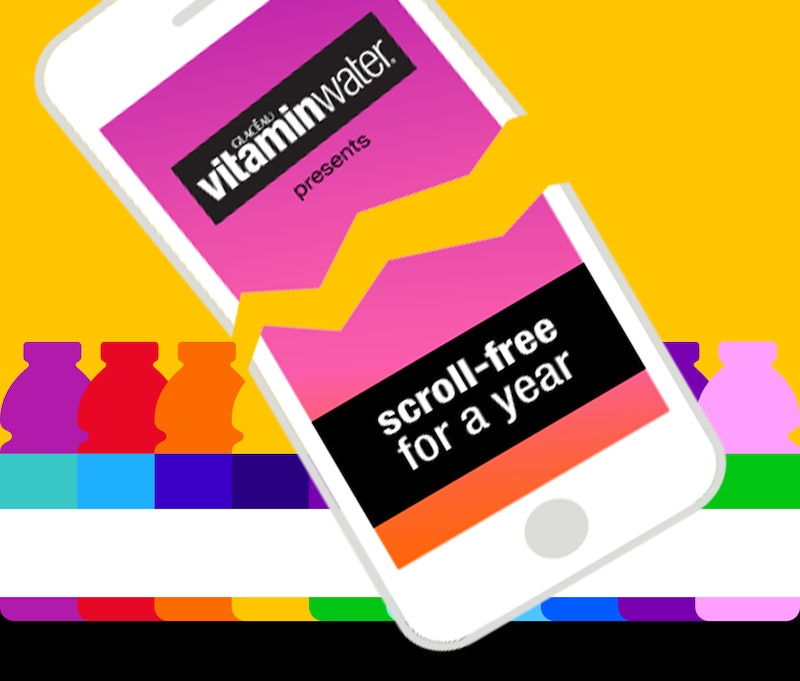 What would you do for $100,000? There are probably quite a few things because that is a ton of money, but vitaminwater is looking for one person to take on a very specific challenge. Vitaminwater is giving $100,000 to someone for not using their smartphone for a year.

If you're thinking, "Oh, that sounds easy," then you should probably enter, because, literally you would just have to not go on your phone for a year. The thing is, though, only one person will be picked to do this, so the biggest obstacle here is being chosen in the first place.

Vitaminwater chose this contest as a promotion because scrolling through your phone for hours on end is monotonous and the company is all about breaking monotony. According to vitaminwater:

The vitaminwater brand stands for breaking the monotony, and intentionally behaving in ways that run against the status quo. Vitaminwater is challenging fans to take on this mission to call attention to the monotony found in their own day-to-day life —from scrolling through their social media to eating the same thing every day — in order to discover a more vibrant way of living outside of the lines.

Plain water? Monotonous. Flavored water with vitamins? Not monotonous. You get it.

So, how do you enter? First, you have to share how you would spend your year if you took a break from your smartphone on Twitter or Instagram using the hashtags #NoPhoneforaYear and #Contest. The entry period starts Tuesday, December 11 at 8 a.m. ET and ends Tuesday, January 8, 2019 at 11:59 p.m. ET. You can enter up to four times.

While the person will not be allowed to use any smartphones or tablets at all, laptops and desktops computers are allowed, as are voice-activated devices that are not smartphones like Amazon Echo and Google Home.

If the person chosen to take on this challenge makes it the full year, they will be given a lie detector test (honestly, the scariest part of all in my opinion) in order to prove it. If the person chosen doesn't go the full year without using their smartphone, they'll receive $10,000, if they make it at least six months, but nothing at all if they give in sooner than that. So, yeah, if you get chosen, please make it at least six months and also please don't screw up your lie detector test!

For now, just get your Instagram or Twitter post ready. You'll want to make a good case for yourself, so might I suggest against saying something about how you're not a big smartphone user anyway so this is totally NBD. This is meant to be a challenge. Good luck, and if you want to enter, you can find more information — including vitaminwater's criteria for judging the hashtagged entry posts — on its website here.