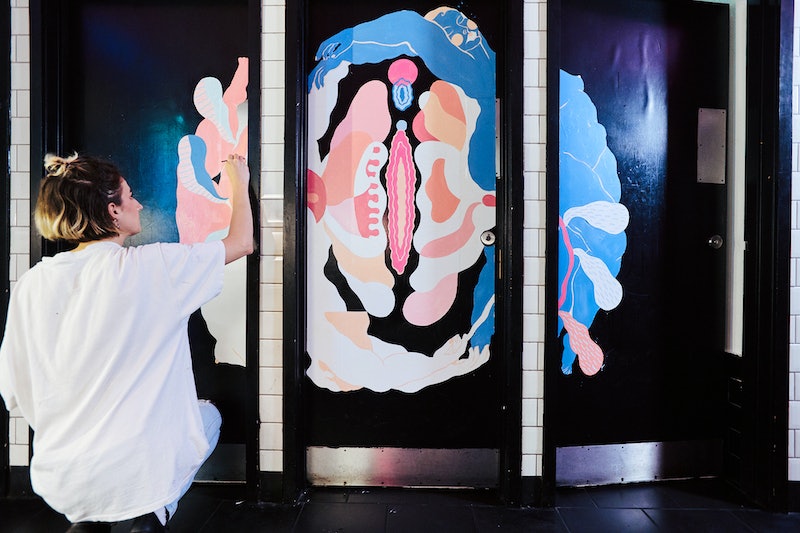 We're all used to going into public toilets and seeing the obligatory penis doodles all over the walls. In fact, I remember as far back as my school days, seeing them everywhere. This may make me seem like a bit of a loser, but TBH initially I didn't really get what they even were! When I did, I was pretty weirded out at seeing them all over the walls and everywhere else on school grounds, and have been ever since. But thanks to a new campaign, vulvas will now replace penis doodles in toilets. There's a really important and beautiful reason behind it, too.

Bodyform has collaborated with renowned artist Oliwia Bober to create the Viva La Vulva Bathroom Takeover, which sees public bathrooms covered in vulva art all over certain venues in London.

For Bodyform, this is an issue of representation. The penis has had its moment, and is drawn all over bathrooms all the time. But vulvas are rarely seen in the same context and there's a real sense of embarrassment about them, particularly in young women, as the Guardian reports. Meanwhile a study conducted by Bodyform found that that 42% of women have felt embarrassed about their vulva, and 61% who have felt pressurised to make it look a certain way.

For this reason, Bodyform wanted to pay tribute to the vulva, an area of the body that's beautiful and important. The Viva La Vulva Bathroom Takeover aims to remind us that vulvas come in all different shapes and sizes, and that we should be proud and never embarrassed to talk about our bodies, whatever they look like.

“It is our mission to break down the taboos that hold women back, so naturally we want to help women celebrate and own their bodies," explains Traci Baxter, marketing manager for Bodyform.

Illustrator Bober also added: "Art is one of the most powerful tools for self-expression and the more we can raise awareness of the beautiful female form, the more women will feel empowered to celebrate their vulva and combat feelings of shame and embarrassment. This campaign is a fantastic example of Bodyform’s mission to help break down the taboos that hold women back.”

And if you were confused as to why I, and the campaign, are referring to them as vulvas rather than vaginas, that's because, as per the Merriam Webster dictionary, "vagina" actually refers to the inside of the genitals, whereas "vulva" is the outside. So what you can see from the outside, and all over walls at selected toilets in London right now, are vulvas.

One venue where you can check out the vulva art is the Queen of Hoxton, in Shoreditch. If you don't live in London and fancy a night out in the capital, now is the time to take the trip down and raise a toast to your vulva.

The takeover is an extension of the “I’ll Say it Again” festival, which runs until June 1 at the Tara Theatre in Earlsfield. The festival is "a celebration of women’s voices through theatre, art and music."

More like this
How “Goblin Mode” Came To Be The Oxford Word Of The Year
By Sophie McEvoy
8 Money Saving Experts To Follow For Accessible Advice
By Maxine Harrison
Everything You Need To Know About Dabloons, TikTok’s New Currency
By Catharina Cheung
8 TikTok Accounts Every Royal Fan Needs On Their FYP
By Kira Richards and Frances Stewart
Get The Very Best Of Bustle/UK