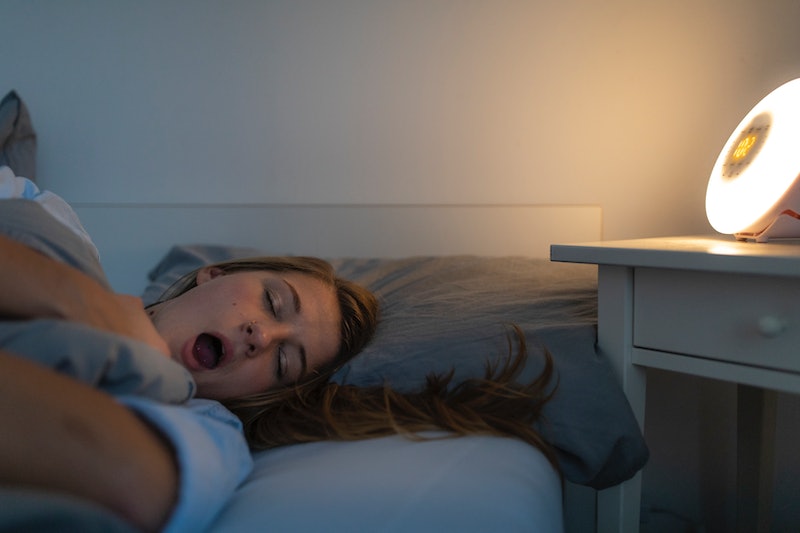 Many of us have the dreaded experience of the winter wake-up: getting out of bed during the colder months while it's still pitch-black outside. It can be a disheartening experience unto itself, but science also tells us that the dark mornings of winter can have some effects on our brains. As the mornings become gloomier and the sun rises later, our brains start to change in small but intriguing ways, from stress responses to overall brain function. If you've ever felt that waking up at 6 a.m. to see a dark world outside affects your outlook for the whole day, research says there's some merit to that.

Humans are naturally wired to be wakeful in the mornings, and become progressively sleepier as the day turns into night. "We are diurnal, or awake and active during the day," Dr. Clifford Segil, M.D., a neurologist at Providence Saint John's Health Center, tells Bustle. Our brains are extremely responsive to light; exposure to dawn light can prompt our bodies into waking up from sleep, which is why alarm clocks that imitate morning light are so popular. Research has shown that artificial lights can change our brain circuitry and waking patterns within a short amount of time. The brain's response to increased darkness, however, is less clear.

Darker mornings don't mean that we'll automatically sleep for longer periods. In a landmark experiment in 1938, two scientists lived in total darkness in a cave for 32 days, and discovered that their body clocks still kept them to a rough 24-hour cycle of sleeping and waking, even without sunlight. However, morning darkness can affect our brains in other ways.

Research published in International Journal of Neurobiology in 2010 highlighted something called the cortisol awakening response, or CAR, as a key factor in our reaction to darker mornings. When we wake up, we experience a spike in the amount of cortisol, a hormone related to alertness and alarm, in our brains. This surge happens around 30 minutes after we wake up, and helps us feel awake and throw off the sluggishness of sleep. Researchers from the University of Westminster explained in The Conversation in 2017 that the CAR response is much more intense when we're exposed to light — and that a big CAR response is very good for our brain function. According to a study published in Brain and Cognition in 2016, the more cortisol you get when you wake up, the better your brain functions over the rest of the day. When you wake up in darkness, the CAR response is lower, and your brain function may suffer accordingly.

CAR responses may also be behind the feelings of increased depression that affect some people during winter. Dr. Segil tells Bustle that some people experience a disorder known as SAD, or seasonal affective disorder during the darker winter months. SAD is characterized by lower mood and increased symptoms of depression. Research published in Psychoneuroendocrinology in 2011 found that people who reported experiencing SAD had lower CAR responses on winter mornings, which may in turn have affected their moods throughout the day.

Cortisol can't explain all of the effects of SAD; Dr. Segil points out that darker winter evenings may also have a role in the lower mood of people with the disorder. Further, a small study published in 2014 in Biological Psychiatry found that brighter morning light reduces the brain's anxiety responses throughout the day, including activation of the amygdala, the brain's center for processing fear and threats. The darker the morning, the more anxious people may be during the day, though more research needs to be done to confirm this link.

The brain's response to the chilly, dark mornings of fall and winter is subtle, but it can have real effects. People who think they may experience seasonal affective disorder should go to a doctor, as SAD can be treated with light lamps, antidepressants, and cognitive behavioral therapy. If you feel crankier, more anxious and less alert on mornings when you've had to get up long before sunrise, it's likely that lack of light has played a part.