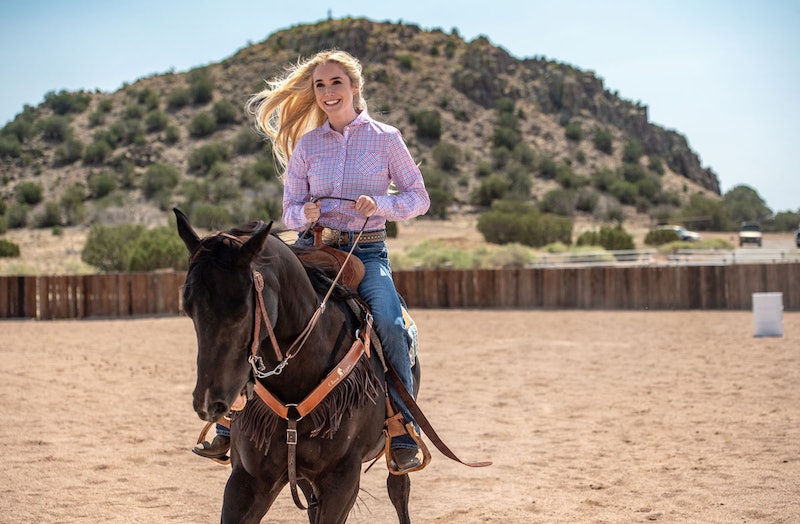 In Netflix's new inspirational film, a young woman with preternatural talent for barrel racing is driving down the highway to her next rodeo. A moment's distraction later, she's thrown from her truck and slams against a metal pole. Doctors tell her she's broken her back, but Amberley (Spencer Locke) is determined to get back in the saddle, and only four months later, manages to get there. Though it'd still be a lovely message of hope either way, Walk. Ride. Rodeo is based on a true story. The determined return to her life's love is the uplifting true life experience of Amberley Snyder, professional barrel racer and now, motivational speaker.

Barrel racing is a rodeo event requiring precision, balance, and intimate understanding between rider and horse, where both whip around barrels in a cloverleaf pattern for the fastest time. According to her own story on her personal website, Snyder began riding at age three, and was just seven when she convinced her dad to get her a barrel-racing horse as a consolation prize for the family's move to Utah. Though the entire family was athletic, her father a former baseball player and her siblings participating in gymnastics and other sports, Amber shone at rodeo, and barrel racing in particular.

Moments before her accident in 2010, Snyder had taken her seatbelt off. Had she still had it on, a doctor said, she'd have full use of her legs. As it was, after five hours emergency surgery, doctors doubted she'd be able to ride again. Talking to Western Horseman, Snyder said, “I told [the doctors], ‘I rodeo. I ride horses. When can I ride again? They told me ‘You’re probably not going to be able to do that again, and even if you get back on a horse you’re probably not going to compete.’ ” Snyder's hope for her future felt dim.

In a Today interview, Snyder explained where the film's title comes from. "The very first day of therapy, when my nurse asked me what my goals are, I tell her, ‘Walk, ride, rodeo, that's it. There's not an 'if,' there's not an 'and,' there's not a 'maybe,' this is what we're doing.'" Amberley and her determination are the heart of the film, as it follows her through this dark period.

The rider dutifully performed her prescribed physical therapy, but still had a great amount of difficulty with balance, a key element of horse riding, forget competing. In the same Today interview, she said that she told her physical therapist the saddle was where she'd always balanced best, but that the comment was repeatedly brushed off. "Finally I just told my dad, ‘Bring my saddle in.’ We're no longer asking, we're bringing it in. So we brought my saddle in and I got up on that saddle and my balance was better there than anywhere else.”

Just four months after her accident, with the help and support of her family and a lot of hard work, she was back in the saddle. Snyder noted to Western Horseman that “everything happens for a reason, and there’s a reason this happened to me. I have zero doubt I will walk again. Five years in a wheelchair just blows my mind. But it’s not forever, so it’s okay. The opportunities have outweighed the bad things." You can watch Snyder's biopic on Netflix when it starts streaming this Friday.