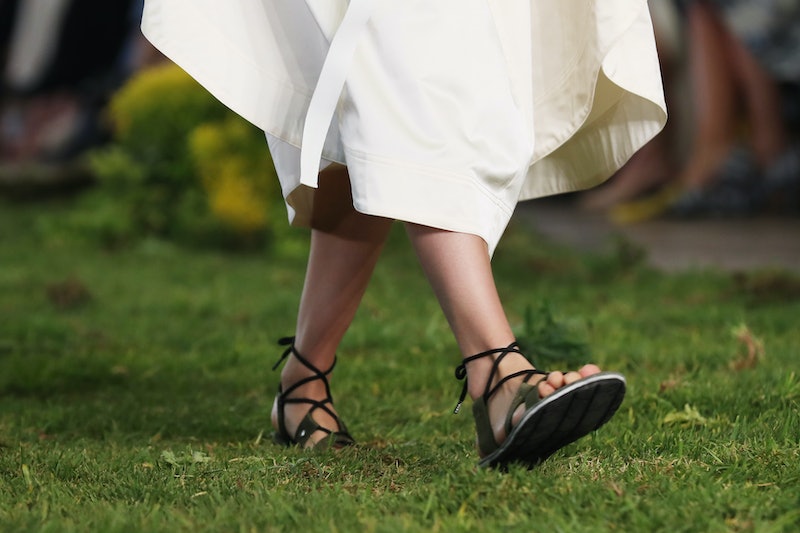 Part of living a healthy lifestyle is finding room in your pre-existing schedule for things you know are good for you — things like brushing your teeth, eating well-balanced meals, and sleeping seven to nine hours a night. Isn't it nice when something you already do is good for you in other ways, too? A new study found that walking can help your brain health over time, and actually improve cognitive function, according to a new study published in the journal Neurology. The study reported that regular aerobic exercise like walking improved executive functioning in the brains of adults at risk for cognitive decline (things like Alzheimer's disease or dementia).

In the study, participants who engaged in walking three times a week for six months "demonstrated improved performance on a standard battery of neurocognitive tests of executive function," the study revealed. Previous research backs this up. According to Harvard Health, physical activity helps reduce things like inflammation, which can have a negative effect on brain health.

"The benefits of exercise come directly from its ability to reduce insulin resistance, reduce inflammation, and stimulate the release of growth factors — chemicals in the brain that affect the health of brain cells, the growth of new blood vessels in the brain, and even the abundance and survival of new brain cells," Harvard Health Blog Executive Editor Heidi Godman wrote.

She wrote that a past study found that aerobic activity can even boost the size of the hippocampus region of the brain, the area responsible for verbal memory and learning. "Even more exciting is the finding that engaging in a program of regular exercise of moderate intensity over six months or a year is associated with an increase in the volume of selected brain regions," Dr. Scott McGinnis, a neurologist at Brigham and Women’s Hospital and an instructor in neurology at Harvard Medical School, told Godman.

If aerobic exercise is not your jam, changing the way you think about it could help you get more of it in a non-intimidating way. Getting more aerobic exercise doesn't have to mean taking up running or joining a gym. There are things you can do during your daily routine to boost your brain. For example, take the stairs instead of the elevator if it's safe and you're able to do so. If your destination is a short distance away, walk instead of driving or getting a ride. Have little dance parties in your apartment every day like Meredith and Cristina on Grey's Anatomy. Have a dog? Take Fido on longer walks.

According to McGinnis, just two hours per week of activity that gets your heart rate going can help improve your cognitive functioning. "Don’t forget that household activities can count as well, such as intense floor mopping, raking leaves, or anything that gets your heart pumping so much that you break out in a light sweat," he said. If you follow this line of reasoning, that means sex counts too.

While it's good for everyone to keep their brain healthy, for those who have family members with cognitive impairments, it's particularly important to exercise your brain. And this researcher shows that one effective way to do that is by moving your body. #TheMoreYouKnow