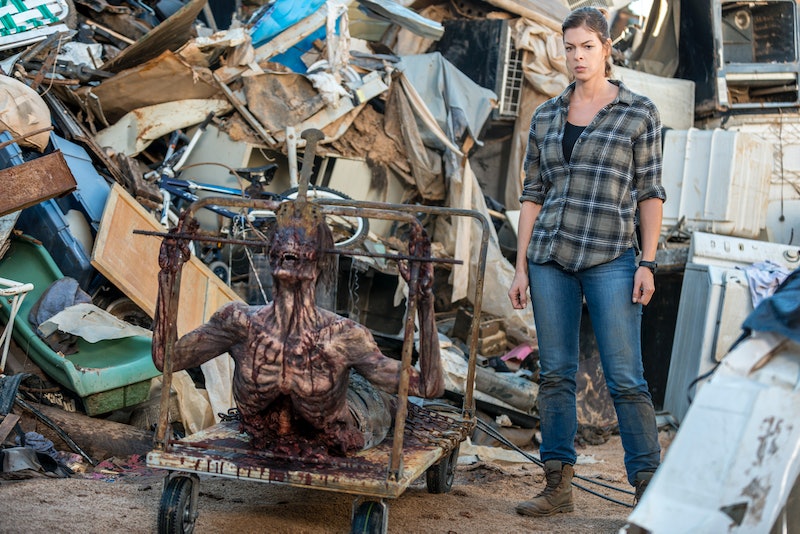 The artist formerly known as Jadis on The Walking Dead is officially going by Anne now, according to the actor who plays her. Speaking on the phone to Bustle, The Walking Dead star Pollyanna McIntosh discussed what Anne is bringing to the group in Season 9, how she's able to redeem herself, and some hints of what new threats are coming. Everyone's skills are put to use in interesting was as the survivors try to build a new world.

"The ladies are back," McIntosh sings, talking about the female character-heavy trailer for Season 9. "It's very much like new beginning in many ways," she says. "But of course, there's always danger around the corner."

Jadis may have betrayed Rick Grimes and his band of heroes more than once, but Anne is turning over a new leaf as the Scavengers are assimilated into other communities now. "We find her [in Season 9] doing her darnedest to be involved," says says. "Be useful, feel like she belongs there and still with the memory of everything that's happened to her. And it's not super simple, really? You know, trying to find one's place in a chosen family is not easy when you've just had a massive spate of grief."

One of the best revelations about Anne's character in Season 8 is that she is an artist who created paintings and sculptures in her dumpster dwelling. In Season 9, she's able to use that to get in good with the "good guys," so to speak — for example, using her knowledge of the Smithsonian in the premiere to help the group secure old-fashioned equipment.

"It's definitely a huge part of who she is and what her strength is," McIntosh says about Anne's artistic talents and knowledge. "One of her strengths. I'm very glad to see that she hasn't abandoned that despite the loss of her community. So it's still present. In the same way that she's focused on finding her place and feeling that she has a reason to be there with this new group, she uses her art in a way that is also advantageous to them, which is kind of interesting to me."

That said, Negan is not dead — and therefore conflicts with Negan aren't gone forever either. "I think she feels that they've settled their business," McIntosh says about her character's complex relationship with the villain in previous seasons. "He's part of what she's leaving behind, really."

There's also potential for Anne to step back into a leadership role. At the end of Season 8, Maggie was seen conspiring with Jesus and Daryl to take Rick Grimes down in one way or another. If one of those three doesn't fill that power vacuum, Anne could.

"I think she was a great leader of the scavengers and I think she'd make a great leader of another group if she chose to. I don't have to talk about Alpha anymore, which is great, a lot of people thought she'd become Alpha....But I don't know, do you think those guys would have her as a leader? She did kill a lot of their people."

Who knew that art and art history could be important in the apocalypse?Although when you're trying to restart civilization from scratch, Anne's skills become all the more essential. Jadis was a good leader for the war, now fans will just have to see how well Anne can adapt to peace — however short lived — and if the others will accept her as one of their own.