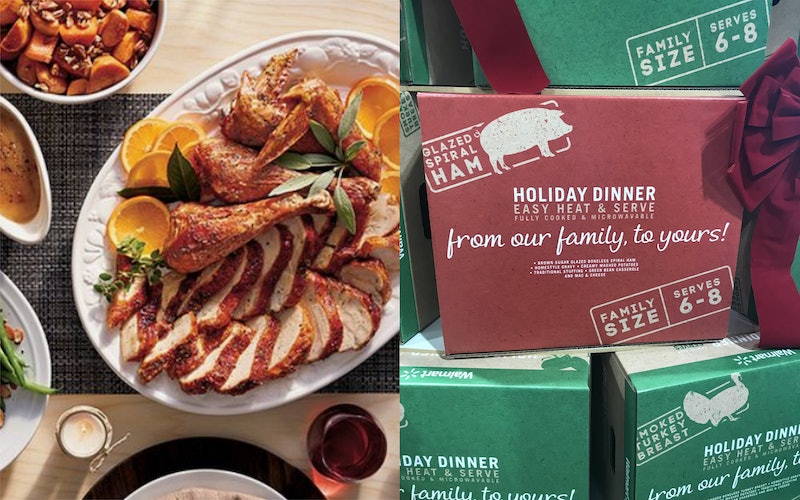 Thanksgiving is coming right up, and if you've found yourself in the position of hosting this year, Walmart wants to help. Walmart is offering Thanksgiving meal kits, which include a meat and four sides that just need to be heated up in the oven. Will your guests be able to tell that you bought the entire holiday meal already fully cooked? Perhaps it's time to find out.

The Thanksgiving kits, which are available in-store, come in two options: brown sugar glazed boneless spiral ham and smoked boneless turkey breast. Both meal kits come with the same accoutrements: homestyle gravy, creamy mashed potatoes, traditional stuffing, green bean casserole, and mac and cheese. What kind of stuffing is "traditional" exactly? Some of us like cornbread. And what type of mac and cheese is it? Stovetop or baked? These are important questions, but it seems that those interested will have to open the mystery box to find out.

The meal kits feed six to eight people, and come in under 50 bucks at $47.88. It's a pretty good price if you're just looking at the quantity of food that is included. Thanksgiving grocery lists can really add up, especially because you need so many random things you wouldn't normally have on hand, like sage. And, really, what does one do with leftover sage?

Clearly, there are some necessary components missing from the box. It doesn't have any cranberry sauce (which may come as a relief to some people) and, more importantly, it doesn't include a dessert. You'd either have to make your own or buy one. And I don't know if you know this, but Walmart also sells baked goods. How convenient.

While some family members might be disappointed with a pre-cooked Walmart Thanksgiving dinner, it could help out if you are expecting a lot of guests, are headed somewhere with a ton of people and have to contribute something, or are going to a Friendsgiving party. Especially with the latter, it could be at least interesting to show up with an entire dinner in a box when some people just brought a bottle of wine.

If this Walmart kit isn't your thing, there are plenty of other options for a no-cook Thanksgiving dinner at home. For instance, Whole Foods has a ton of holiday meal options that can be picked up in-store. One choice is the Classic Roast Turkey Dinner for Eight, which comes with a roast turkey, mashed potatoes, herb stuffing, gravy, cranberry orange sauce, and green beans for $119.99.

Boston Market also does Thanksgiving dinners that can be picked up or shipped. Their Whole Roasted Turkey Meal for 12 includes a lot of food and doesn't skip out on an appetizer and dessert. It features spinach artichoke dip, crackers, turkey, mashed potatoes, gravy, stuffing, cranberry walnut relish, rolls, a pumpkin pie, and an apple pie, and also goes for $119.99.

Whether you choose to test out the Walmart meal kit, order another pre-made meal, or decide to just get cooking yourself, just please don't forget dessert. It's one of the best parts.