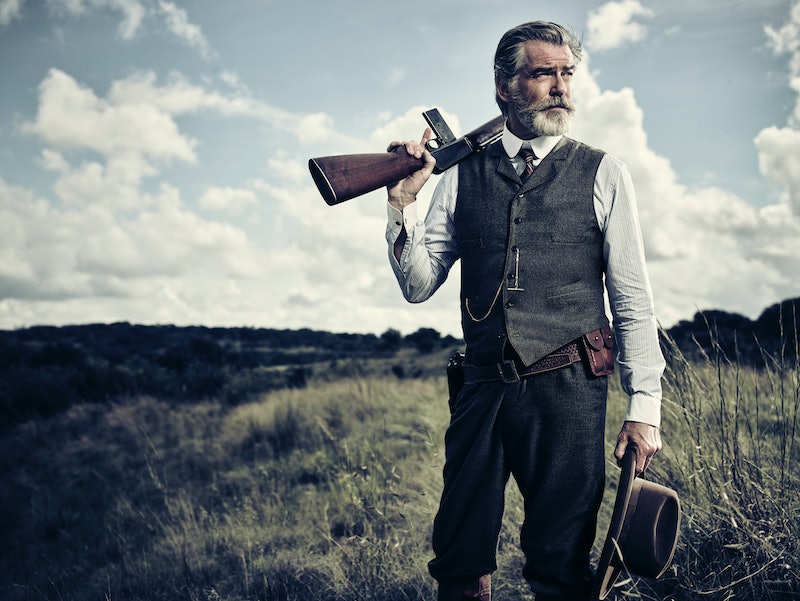 Only four months into 2017, the year is already stocked with a stream of page-to-screen adaptations, from childhood classic A Series of Unfortunate Events to YA favorite 13 Reasons Why. Now joining the barrage of books making the leap to TV is AMC's The Son, a gritty, multi-generational western based on Philipp Meyer's Pulitzer Prize–nominated novel of the same name. The series is set in southern Texas, tracing its ascent from wild frontier to oil-rich hotbed through the eyes of Eli McCullough (Pierce Brosnan), a wealthy but ruthless cattle rancher with a dark, unsettling past. But before you watch his story play out on screen, you may be wondering: Was Eli McCullough a real person?

As Meyer told My Statesman in 2013, the character's roots are fictional. In fact, he started out as a legendary figure that was only referenced in the book, but as Meyer delved further into his writing, he realized Eli was the one driving the narrative. As he told the outlet:

“There were six or seven characters originally. It was set in the present day. I originally conceived it as a book about the rise of a family dynasty and America’s relationship with war and violence. But I realized that these characters were talking about this legendary guy, and they were commenting on the American myth, in a way. And finally, about two and a half years into the book, it finally hit me that … I needed the legendary character in the book.”

Still, that doesn't mean Eli didn't have some historical touchstones. As NPR reported, Meyer did extensive research for the novel, reading more than 250 books on the West. To get a sense of what life may have been like for Eli and his Comanche rivals, he even spent months eating and sleeping amidst the desert and the plains. While there, he taught himself to bow hunt, took tracking classes, and visited a rancher who he helped to kill several buffalo. Those experiences led to a character molded after the rough and tumble cowboys who ruled the old American West. As he told NPR,

"Eli McCullough represents the sort of mythological heroes that founded America or founded the West. They're physically powerful; in his case he's a small man, but physically powerful. They are physically brave. They take what they want. If you were to do some moral analysis of their character they wouldn't, maybe, by today's moral standards, come out looking very good."

That certainly fits Eli's description. According to AMC, he's a fearless, unflinching man who "believes that the essence of human nature is brutality, desire, envy, and greed," and he breeds his family to "prepare for a brutal and unjust world." The series spans from his childhood to present day, flashing between his capture by Apaches in 1849 and his life as a vengeful, cold-hearted rancher 60 years later.

The character may be fictional, but at the very least, Eli represents a real part of American history. Watch him conquer the Old West when The Son premieres April 8 at 9 p.m. ET.