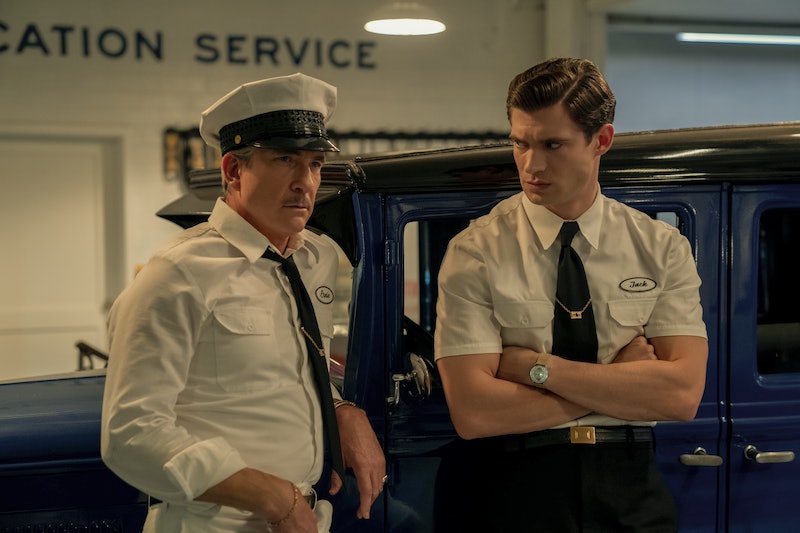 SAEED ADYANI/NETFLIX
By Jake Viswanath
May 4, 2020

Netflix's new show Hollywood is all about a glamours, and problematic, time in the history of movies, but not all of it is real. Creator Ryan Murphy rewrote history for several famous celebrities of the times, and crafted intriguing fictional characters, leaving viewers to find out for themselves what's accurate — including whether or not Ernie's Golden Tip Gasoline in Hollywood was a real place. While that exact LA locale is a figment of Murphy's imagination, it appears to have been based on a real gas station that served as an underground brothel at one time, run by an actual former pimp who inspired the character of Ernie.

Dylan McDermott's character Ernie is pretty similar to Scotty Bowers, a former sex worker-turned-pimp. Bowers, a self-described "gentlemen hustler" to Hollywood's elite, was a former Marine who moved to LA after World War II and started working at Richfield Oil station at the intersection of Hollywood and Van Ness. And while McDermott's character isn't actually meant to be a version of Bowers, it's clear that he was the inspiration. Speaking with Town & Country, the actor revealed that he prepared for the role of Ernie by watching a documentary on Bowers, and based his character on a combination of the Hollywood hustler and Clark Gable.

As Bowers explained in his memoir, Full Service: My Adventures in Hollywood and the Secret Sex Lives of the Stars, he was first picked up at the gas station by Oscar-winning actor Walter Pidgeon, and his name quickly spread in Hollywood circles, especially among the LGBTQ community. According to the book, he met gay director George Cukor, who introduced him to figures like Katharine Hepburn and helped him earn the trust of Hollywood's hottest stars and filmmakers. He then convinced more young, attractive men and women, including some Marine buddies, to work for him, birthing his own prostitution business out of the station.

Some of the smaller details about the fictional station seen in Hollywood were based on real-life stories as well. The trailer that Jack is sent to in the first episode to service songwriter Cole Porter seems to be based on an actual trailer behind Richfield Oil that Bowers and his workers used with clients. The famously gay (but closeted) Porter was also reportedly a client of Bowers, as was actor Rock Hudson. In fact, many gay actors who had to remain closeted to prevent potential career failures turned to Bowers in order to keep their sexualities a secret.

However, as with everything on Hollywood, there are some differences between the character and the man he was based on. Unlike Ernie, Bowers didn't own the gas station he turned tricks out of. He later moved out of the station, working as a bartender while still running his prostitution business. And — spoiler alert — he didn't suffer from throat cancer like Ernie does on the show. In fact, Bowers lived a fulfilled life, seeing his memoir adapted into a documentary in 2017, and died at the age of 96 in October 2019.

Bowers' stories in his book are much more explicit and salacious than what can be written here, so it's no surprise that his imprint is still felt on modern-day Hollywood, both real and fictional.