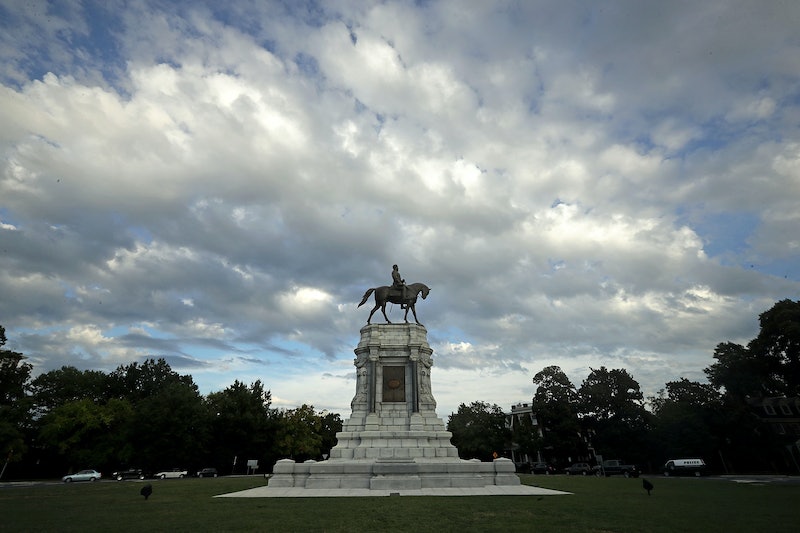 Sunday will mark the one-year anniversary of a white supremacy rally in Charlottesville that left Heather Heyer dead. In preparation for the anniversary, a state of emergency has been declared in the state of Virginia, where officials are predicting a "Unite the Right" march to pop up in several areas. Given how much controversy has unfolded in the wake of the original march, you might be wondering whether the Robert E. Lee Statue was taken down in Charlottesville, since it helped spark the protests to begin with in 2017.

The initial protests in Charlottesville last year were a part of an effort to resist the planned removal of Lee's statue from a park in Charlottesville. Those who wanted the Confederate statue taken down argued it was a painful reminder of the nation's history of violence and racism. After the events of the rally unfolded, a shroud was thrown over the statue until February, 2018, when the shroud was pulled back off.

Though the lawsuit over the intention to remove the Confederate statue is still in process, Judge Richard E. Moore rejected an argument that the statue should remain shrouded in black until the one-year anniversary of Heyer's death.

Judge Moore had initially refused the idea of the statue being shrouded for the duration of the lawsuit. But after Heyer's death, he allowed it to occur for several months. Now, the statue stands bright beneath the sun, once more.

A Virginia state law has stood in the way of the statue's removal. That law prevents any national memorials from being removed. Despite city officials' and lawmakers' best attempts to remove the statues anyway, the law has held strong.

In the year since the Charlottesville rally, at least 30 Confederate monuments have been removed, per The San Francisco Chronicle. But that doesn't mean the debate is fully over: groups like the Sons of Confederate Veterans have claimed that the United States is effectively purging a massive part of American history by removing all monuments to the Confederacy.

What's more, The San Francisco Chronicle reports that Virginia isn't the only state with a law in place to protect controversial Confederate memorials: six other states have them, too. So it would be a matter of having a judge choose to bypass or change the law, if Charlottesville were ever to see the day that the Lee statue was taken down.

For now, the statue will be present for any rallies that occur on Sunday. After being denied a permit for a rally in Charlottesville, Jason Kessler (the leader of last year's rally) decided to hold the official rally in the park across from the White House. But officials still expect there to be smaller rallies across Virginia.

Virginia Governor Ralph Northam said to USA Today of the rally, “If something happens in Washington, it can easily affect Northern Virginia, and so we’ve had those discussions. I think they can use the usual means of transportation, but I don’t think anybody’s going to go out of their way to accommodate some of these groups.”