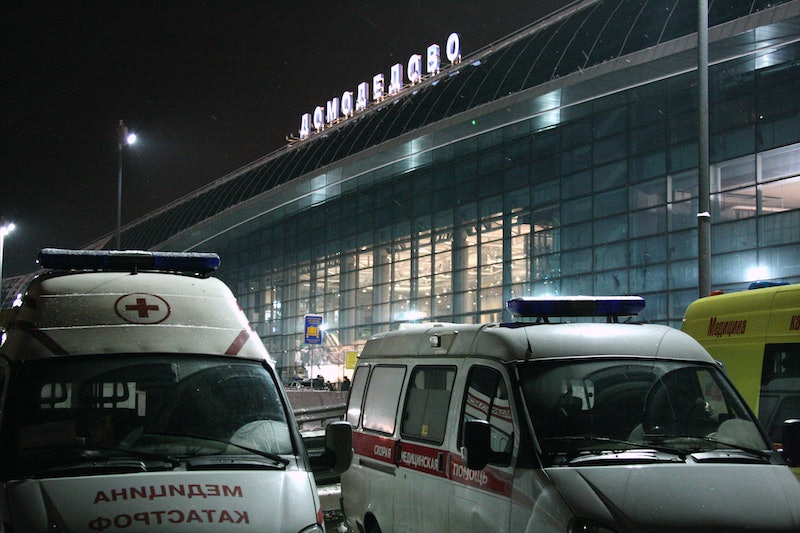 All passengers on board Saratov Airlines flight 6W703 are presumed dead after it crashed shortly after takeoff from Moscow's Domodedovo Airport. The plane was headed to Orsk, a Russian city near the border with Kazakhstan, when it began to descend rapidly just minutes into the flight. Witnesses told news agencies that the plane was on fire, but authorities are not exploring terrorism in the Russian Saratov Airlines plane crash at this time.

The causes being considered include pilot error and poor weather conditions,The Guardian reported. Moscow has received record-setting snowfall in the past weeks. The Investigative Committee of Russia told CNN that officials will launch a criminal investigation. President Vladimir Putin's press secretary Dmitry Peskov also said that the Russian leader had called for a "special commission in connection with the plane crash."

Flight 6W703 crashed in the Ramensky district at the edge of Moscow in an area so remote that rescue workers could not arrive to the site on foot. The 150 or so emergency responders sent to the scene had to do so on foot. "Fragments of the An-148 plane and several bodies have been found," Russia’s emergencies ministry told the TASS news agency. Pictures from Russian media show pieces of the plane in a snowy field. There were 71 people on board, 65 passengers and six crew members.

The plane, an Antonov An-148 narrow-body regional jet, was just seven years old and had been acquired by the airline one year ago. Its black boxes could help paint a picture of what downed the plane, once they are recovered from the scene.

Saratov Airlines temporarily had its international routes suspended after inspectors found non-crew members in the cockpit of one of its planes in 2015. International charter flights resumed in 2016 after it appealed the ban and changed its policies. The airline flies mostly to destinations in Russia, Georgia, and Armenia. At least one European destination, Thessaloniki, Greece, is currently on the schedule.

In addition to calls for a commission, Putin also expressed his condolences. "The president offers his profound condolences to those who lost their relatives in the crash," Peskov, the press secretary, added.

Russian airlines have had several high-profile crashes in recent years. The deadliest was an Airbus A321 belonging to the Russian airline Kogalymavia, marketed as Metrojet, that went down in Egypt's Sinai Peninsula in October 2015. The cause of that crash was ultimately found to be terrorism, despite reluctance by Egypt to acknowledge the point. An Egyptian branch of Islamic State took responsibility for sneaking an explosive device on board. 224 people were killed.

The other crash that drew international headlines was the downing of a Tupolev Tu-154 military jet that was carrying the Red Army Choir, also known as the Alexandrov military music ensemble. All 92 people were killed when the plane went down near Sochi, Russia, in the Black Sea. Pilot error was found to be at fault.

In general, Russia has had more safety issues with commercial aviation than other large countries like the United States. In the past 10 years, from 2008 to 2017, some 326 people had died in commercial flight accidents in Russia, compared with just 61 during the same timeframe in the United States, The Washington Post reported using International Civil Aviation Organization numbers.

The investigation into Sunday's crash could take time. It's unclear if international inspectors will participate. Normally investigators from the plane's country of origin would be involved. For example, French inspectors are involved in Airbus crash investigations, while American investigators respond to the scene involving Boeing planes. The Antonov An-148 was built in the Ukraine, which has had strained relations with Russia since the annexation of Crimea.

For the families of those on board, answers can't come soon enough.