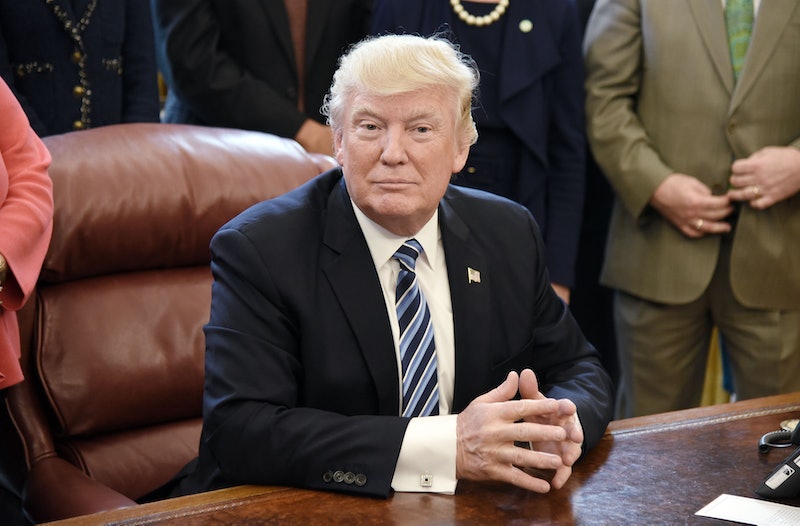 On Monday evening, the Washington Post reported that President Donald Trump allegedly revealed highly classified information to two Russian officials during a meeting last week. There are many questions surrounding these allegations — and one of them likely is whether or not Trump's Russia meeting was taped.

The Post reported that Trump disclosed highly classified information to two Russian officials — Sergei V. Lavrov, the Russian foreign minister, and Sergey I. Kislyak, the Russian ambassador to the United States — during a meeting last week. The information allegedly revealed was considered "highly sensitive" and was related to ISIS terrorism tactics. The Post further reported that Trump's sharing of the information with Russian officials was hugely controversial, as it had not even been shared with U.S. allies or many U.S. government officials. For its part, the White House has denied the claims in the Post's story, with deputy national security adviser for strategy Dina Powell saying "the story is false."

Considering the controversy surrounding the meeting and the highly different accounts of it provided by the Post and the administration, one may be wondering whether a tape exists of the meeting that could help corroborate (or disprove) any claims made about it.

An official and publicly available tape is unlikely. All U.S. media outlets were barred from the meeting, meaning there was no American media video, audio, or photo coverage of the event. A Russian news agency's photographer was (somewhat controversially) allowed into the meeting; however, the agency only released photographs and once again did not provide any type of recording of the event.

Thus, a confirmed, official tape of Trump's now-controversial meeting with the Russian ambassador and foreign minister does not exist. However, Trump's recent comments about taping his conversations in the White House have led some to speculate as to whether an unofficial, surreptitiously recorded tape of the meeting does exist.

To expound, last week, after he fired former FBI Director James Comey, Trump said via Twitter that Comey "better hope that there are no 'tapes' of our conversations before he starts leaking to the press," implying that the president may be recording his conversations in the White House. Moreover, the White House has repeatedly refused to confirm or deny the existence of White House recordings, with Press Secretary Sean Spicer merely saying in a recent press briefing, “I think I made it clear last week that the president has nothing further on that. ... I was very clear the president would have nothing further on that last week. I made it clear what the president’s position is on that issue.” To be clear, neither Spicer nor the president have explained what the "president's position" is.

So while no press tapes or officially acknowledged recordings of Trump's controversial meeting with Russian officials last week exist, Trump's previous statements about White House recordings and the administration's refusal to deny they exist certainly makes one wonder whether a tape of the meeting does, indeed, exist. It'll be interesting to see whether or not the Trump administration addresses the question of a potential tape as the situation unfolds.