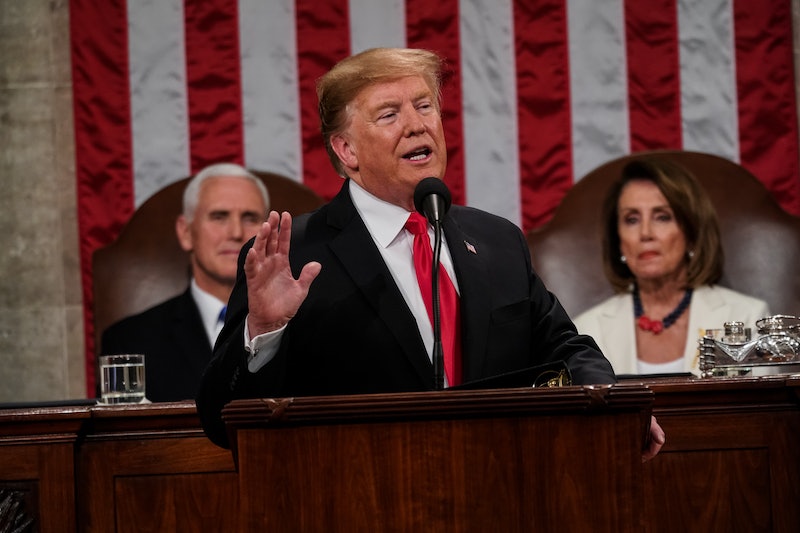 Record-breaking isn't only for sports. If you're a history buff with a penchant for politics or just someone who tuned into President Donald Trump's State of the Union (SOTU) address on Tuesday night, you may be wondering if Trump broke the record for the longest SOTU speech. But that title belongs to someone else.

Former president Bill Clinton gave a SOTU address that lasted for 89 minutes in 2000, making it the longest one in America's history. Clinton's 1995 SOTU speech also holds the title for the second longest, which lasted for 85 minutes. Trump's 2019 speech is in third place when it comes to how long it lasted — his address on Tuesday went on for 82 minutes.

While Clinton holds the titles for the longest spoken SOTU speeches, former president Jimmy Carter holds the title for the longest written State of the Union speech, according to National Geographic. It was a dizzying 33,667 words penned in 1981. It may be of interest to some history enthusiasts that Carter, unlike many of his presidential peers, chose to give only a written State of the Union address. The first president of the United States, George Washington, gave the shortest written speech, containing only 1,089 words.

The shortest spoken State of the Union address came from former president Richard Nixon, who wrapped up his speech in 29 minutes in 1972.

In his 82-minute-long speech, Trump tackled a range of topics. But his focus centered mainly on his demand for a border wall between the United States and Mexico. It is the same hypothetical wall that Trump has demanded $5.7 billion for in a budgetary bill — a demand that the Democrats have strongly rejected.

As a result of Trump doubling down on his southern border wall position, a 35-day-long government shutdown overwhelmed 800,000 federal workers throughout the country who had to wait for two consecutive paychecks, halting federal services in National Park, freezing governmental research, forcing some government workers to ration their medication to avoid debt, and a host of other problems.

On Tuesday night, Trump attempted to call for bipartisanship, saying that both Democrats and Republicans had to choose between "greatness or gridlock, results or resistance, vision or vengeance, incredible progress or pointless destruction."

"We must reject the politics of revenge, resistance and retribution — and embrace the boundless potential of cooperation, compromise and the common good," Trump said. "Together, we can break decades of political stalemate."

Trump also tackled the American economy, saying that if countries charged the United States "an unfair tariff," the country should retaliate with a similar rate. "This is not an option," he said. "This is a necessity."