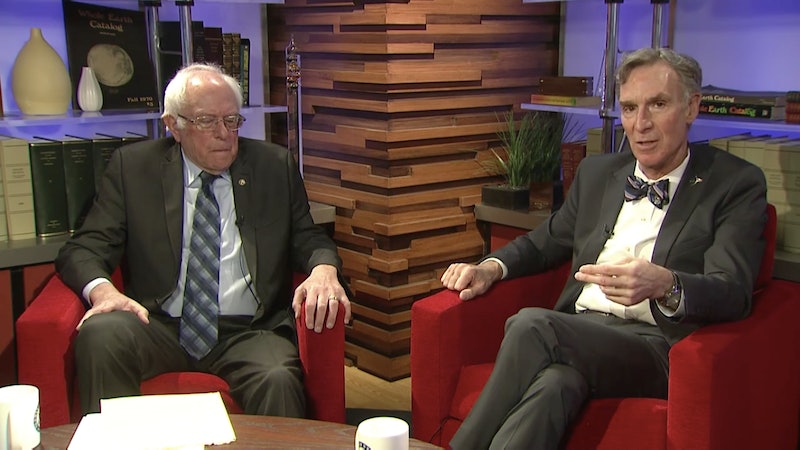 If you've been looking for something with which to explain climate change to someone who thinks it doesn't exist, or perhaps you've been interested in learning more about it yourself, you now have the perfect option — this Bernie Sanders and Bill Nye climate change video explains it both in scientific and political terms. By the time you finish watching their conversation, you'll definitely find yourself searching for a list of ways you can help the environment.

One of the most important moments of the conversation came at Sanders' second question, when the senator asked Nye to address those who insist that the earth's recent warming is part of a natural cycle the planet has always experienced, as well as their assertion that the scientific community has yet to reach a clear consensus on the topic. Nye responded, "Well, the science is settled, everybody, sorry," and followed with an explanation that 97 percent of scientific research concludes that the earth is indeed undergoing the unnatural, harmful process of climate change. He also criticized Fox News anchors for continually spreading the impression of division among researchers to their viewers.

Later on, Nye explained the cognitive dissonance of those who deny climate in the face of undeniable evidence.

Here's what we say — there's overwhelming proof. Proof isn't even the word. It's overwhelming evidence. And so, what I believe you're doing on the other side is you're suffering from this magic thing — magical thing called The Backfire Effect. When you see evidence that conflicts with your worldview, you just double down on denying it. And we all do it [. . .] but the stakes when it comes to climate change in the world's population are huge.

Nye's description of the consequences that inaction can lead to are chilling. Sea levels rising and leading to the sinking of coasts, populations in disadvantaged areas abandoning their homes with nowhere to go, lack of energy sources for electricity and transportation, etc.

Nye's primary suggestion throughout the conversation is that perhaps people who don't want to work toward battling climate change can be convinced to join the cause if they're shown that renewable energy — and other environmental efforts — would have a positive effect on the economy. "Is it true that [Trump] contradicts himself?" he asked Sanders at the start of the conversation, before going on to suggest that this quality might be useful in trying to get the president to change his mind.

Sanders has long been a fierce proponent of taking measures to combat climate change. During the 2016 Democratic primaries, he repeatedly described it as an "emergency," and argued that tackling the problem should be approached with the same swiftness used during warfare.

The conversation between the two men is a must-watch for pretty much everyone.